If you haven’t figured it out by now I enjoy history. Specifically I enjoy the parts of the past when the MIchigan/Ohio State rivalry was balanced or when Michigan was dominating. Since it is the week of The Game I figured we would take a look back to the time when the rivalry was at the peak of its powers. 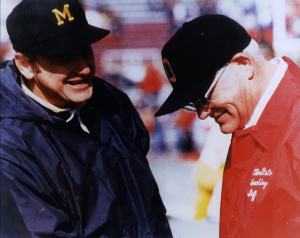 “And then the guy said we should pass more, can you believe that?”

The Ten Year War is a phrase that is thrown about by both sides and it was the ten year period that Bo Schembechler and Woody Hayes faced off as the coaches of their respective universities. Long story short is Woody had coached at OSU for 18 years at OSU before his mentee Bo Schembechler took the Michigan job in 1969. From 69-78 the two schools faced off every year with the winner heading to the Rose Bowl. This ten year battle help form the rivalry into the one we see today.

Now I am not here to give you a history lesson. If you want to learn about it just do what any normal person does and hop on the Wikipedia page. (Although some of the facts aren’t straight about the rivalry.)

I firmly believe that neither of these coaches, specifically Woody would have been able to survive the instant communication age that we live in today. Let us dive into the Ten Year War and how it would be covered today. 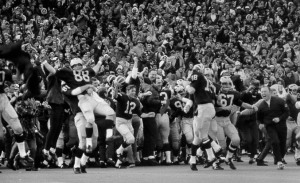 The Game: OSU came in with a 22 game win streak and had won the National Title the year before. Bo was in his first year and was 7-2 at the time and he had been planning for this game all year. Michigan went into half up 24-12 and kept OSU out of the endzone in the 2nd half. This was a big deal considering the win streak and OSU being a 17 point favorite.

Reaction Then: “The Upset of the Century”- Hayes said this was his best team so while this is hyperbole it may not be that far off.

2013 #HotSportsTake: “The Upset of the Century”-  If Michigan wins on Saturday I think it would be received something similar

OSU twitter reaction: @OSUCoachHayes Everyone get out and push this damn bus across the state line (This would obviously be an assistant as no way would Woody Hayes actually use twitter)

The Game: Both teams came in unbeaten but OSU and Woody got their revenge. They put 24-12 all over the football facility and the town in general so Michigan was basically screwed from the get go. Add to the fact OSU brought back a bunch of seniors (including Rex Kern) who won all those games and Woody was on them for 364 days and it is not surprising.

Reaction Then: “OSU and Woody Get Their Revenge” 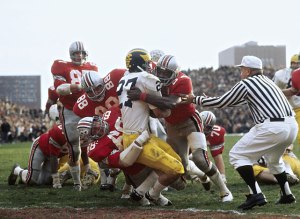 2013 #HotSportsTake: Umm, “OSU and Woody Get Their Revenge.” So far it would be the same damn thing. Lets see if that changes

OSU twitter reaction: @11W Worth mentioning again: Great teams find a way to win all of their games. Really good team look fantastic most of the time, but slip

Michigan twitter reaction: @mgoblog Three things can happen when you pass and two of them are bad, run power Bo

The Game: Michigan came in unbeaten and ranked number 3 and was in the National Title hunt while OSU was struggling at 6-3 with all of the players that had graduated. Despite the fact Michigan came in a heavy favorite and was at home they struggled with OSU. Michigan still won but the game is most remembered for Woody tearing up the down markers at the end of the game when he felt OSU was interfered with late in the game. Michigan would go on to get upset in the Rose Bowl by Stanford and fall out of the title race. (This happened a lot under Bo)

2013 #HotSportsTake: Every columnist in America would write about Woody Hayes acting like a mad man on the sidelines. They probably wish that this happened today

Michigan twitter reaction: @MaizePages Michigan has a good shot to go unbeaten, we normally do well out in Pasadena

The Game: Michigan was once again unbeaten heading into the game and was led at QB by Ohio native Dennis Franklin. He was quoted as saying “only the good ones” (referring to Ohio kids) go to Michigan. This was not received well in Columbus as the Horseshoe was on fire that day. OSU was led by freshman RB Archie Griffin and despite their one loss, still had a chance to go to the Rose Bowl. This game is remembered for Bo going for it on 4th inside the 1 yard line twice and being stuffed both times. Kicker Mike Lantry still had a chance to tie it with a 46 yarder late in the game.

Reaction Then: “Bo Refuses to play for tie, OSU wins”

2013 #HotSportsTake: “Bo Schembechler Has Balls, Big Stupid Balls” Instead of taking the tie and going to Pasadena, he will spend the holidays at home. Admirable but mistaken.

OSU twitter reaction: @Johnny11W THE GREAT ONES STAY IN OHIO

Michigan twitter reaction: @LantryMike Yea, let me kick the 46 yarder (All Michigan players are banned from using twitter after Bo learns of this and what twitter actually is) 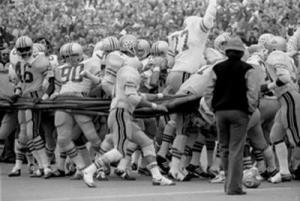 The Game: Of all the games in the Ten Year war this one probably had the most hype. Each team was unbeaten and ranked in the top five. Both were National Title contenders and this would be an elimination game on the way to the title. Only one problem, the game ended in a 10-10 tie. Mike Lantry missed two more long field goals in the 4th quarter because Mike Lantry has had a tough life. (He was also a Vietnam vet.) The Rose Bowl bid would be put to a vote of the B1G athletic directors and everyone assumed Michigan would go because they had dominated the game and OSU went to Pasadena the year before. However, Michigan QB Franklin broke his collarbone late in the game and OSU ended up winning the vote and went on to Pasadena where they beat USC. The tie cost them a title though as an 11-0 jumped them. Freaking SEC bias.

National Reaction: @donovanjmcnabb: I honestly didn’t know there could be a tie (I actually think if this happened now twitter might break.)

Michigan twitter reaction: @DefintleyNotMikeLantry seriously tho, can I get a kick inside of 40 yards please????

The Game: Once again Michigan came into the Game undefeated while OSU had a controversial loss to Sparty a few weeks prior. (Woody Hayes was pissed and slammed B1G commish Wayne Duke into a locker. Yes that is right, different age man.) The game was in Columbus and Michigan jumped out to a 10-0 lead. OSU was able to chip away with three field goals prior to halftime and took a 12-10 lead in the 3rd Q. Once again the game came down to Michigan’s Mike Lantry’s foot. Once again he missed a late field goal, this time well within his range. Many thought he actually made it but once the refs signaled no good pandemonium took over the Shoe and the fans stormed the field. The lasting image of the game is Lantry by himself at midfield as he is surrounded in a sea of Red

Reaction then: “Everything Comes up Roses for OSU”

OSU twitter reaction: @ramzy Mike Lantry I will buy you all of the bourbon 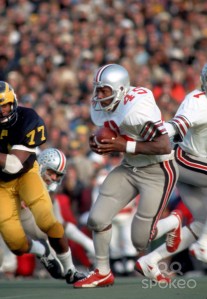 Archie Griffin was in his senior year and on his way to winning his 2nd consecutive Heisman Trophy. The Buckeyes were undefeated and Hayes felt the time was as good as any to get another National Title. Many in Columbus wondered if Hayes would retire on top if OSU won the title. Michigan still came into the game without a loss but had two ties. They were in a bit of a rebuilding year but the game was in Ann Arbor and Michigan had a hot shot frosh QB Ricky Leach. He led Michigan to a surprising 14-7 4th quarter lead but he threw a late interception that lead to an OSU score and the Buckeyes won 21-14. They would fail to win the Rose Bowl and another National title but that was all good compared to the heat Bo was getting in Michigan for not beating OSU in four consecutive tries.

The Game: For the first time in six tries Michigan came into the game with a loss. They had been upset by Purdue a few weeks prior but the team was still loaded. Ricky Leach was blossoming as a sophomore and had a stable of backs behind him. OSU was having a bit of an off year but still came into the game 9-1 and held out hope they would win with the game being in the Horseshoe. The first half was scoreless but the Michigan ground game took over and the Wolverines would win convincingly 22-0. This was their first win in the series since 1971 and the first win in Columbus since 1966.

2013 #HotSportsTake: “Bo is off the hot seat (as long as he wins in Pasadena)” Michigan would slay the OSU dragon but once again fell short in the Rose Bowl. 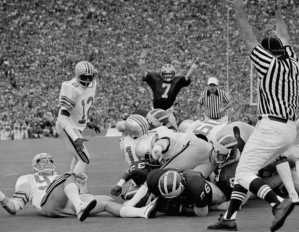 The Game: Michigan spent most of the season ranked #1 but were once again upset, this time by Minnesota. OSU also came into Ann Arbor 9-1 but were considered underdogs. Despite this the Buckeyes actually dominated in terms of yardage but couldn’t produce it on the scoreboard. Multiple turnovers let Michigan win the game 14-6. This was two years in a row that OSU had failed to score a touchdown against Michigan and there was a growing sentiment in Columbus that the old man needed to retire.

2013 #HotSportsTake: “The B1G is overrated” Michigan would lose to Washington in the Rose Bowl and OSU got clobbered by Alabama in the Sugar Bowl. The hate against the B1G is nothing new people

OSU twitter reaction: @Jones I just want to have a modern offense

Michigan twitter reaction: @michroar1 COME RUN IN THE FIELDS OF JOY WITH ME

The Game: The final year of the Ten Year War ended with Michigan holding OSU out of the end zone once again. OSU was in a transition year with frosh QB Art Schlichter while Michigan was churning along with senior QB Ricky Leach. OSU led 3-0 but Michigan was just too much for OSU and won the game 14-3. The heat was really on Hayes now who would be forced to resign after the Gator Bowl when he punched one of the Clemson players. His health had been deteriorating and he was a diabetic and it was believed he blood sugar was out of whack when  he struck the player. It was a bitter end to such a great part of the rivalry.

Reaction: “Near the end for coach Hayes”

2013 #HotSportsTake: “Woody Hayes is a crazy person” During the Michigan game there were scenes of Woody punching himself in the face. I am not sure the internet could handle this if it happened today

The back and forth between Michigan and OSU would continue for another decade with Earl Bruce at the helm against Bo but it wasn’t the same without the old man. Hayes ending in Columbus was hard for everyone including Bo since he and Woody were such good friends. I truly believe Bo retired when he did because he didn’t want to go out like Hayes did. He was always learning from his mentor even until the very end.