It’s been about seven weeks since Player Hater’s Fall made its debut, and to me, that basically counts all sixteen of you readers as part of my family now. Family is important for all aspects of life. It’s there to celebrate the good times. It’s there to annoy the hell out of you. It’s there for the low points. This week, I come to my family for a low point. I come to you all for not your sympathy, but just for someone to lean on, for a shoulder to cry on. 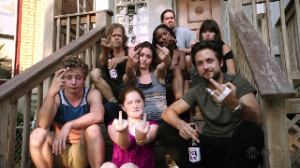 This is how I envision our family. Except Emmy Rossum is my wife, cuz she’s a babe.

What do all overweight, balding, poor, single guys who watch sports on mute while writing up a sports blog and listening to their Lady Gaga Pandora station have in common?

They love fantasy sports, and fellas (gals?), I’m no different except I cultivate mass. I’m not overweight.

It hasn’t been a complete loss this year as my keeper league team is 4-2, as is my dynasty team league (which by the way, easily the most fun league I’ve ever been a part of and I’m organizing a new one next year for those interested), and I’m 60-32 in pick’em (no spreads) with a four game lead. But let’s put it this way about my other fantasy team: I just executed a trade with someone that sent Willis McGahee to his squad in exchange for Martellus Bennett and I couldn’t be happier. Yeah, that team is 1-5. Got to send a message, wake the boys up. How pathetic is that? I just traded a washed up RB on the Browns in exchange for a grown ass man who refers to himself as the Black Unicorn and Orange Dinosaur. I’m screwed.

Not too bad overall though, right? I mean, three out of four fantasy aspects are going well. Right?

Oh man, remember that song “All the Things She Said” by that lesbian group t.A.T.u.? It just came on my Pandora. So money. 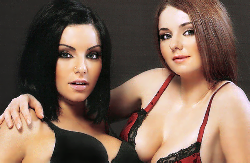 Haven’t heard from t.A.T.u. in a while. I hope Putin didn’t get them like Pussy Riot.

Okay sorry, enough stalling. So here’s the situation: it’s an NFL wins league. A buddy of mine got the idea from a Bill Simmons article where 10 guys get together and each picks three NFL teams before the season starts. Everyone throws in some cash and the person with the best overall win/loss record wins. That simple, yet incredibly fun.

Let me tweak that last statement. It’s incredibly fun for everyone but me.

The selection process is unique, and by unique, I mean I have no idea how it works. I ended up with picks 3, 13, and 30. I assume the scholars that lost the translation of San Diego long ago were also the ones to come up with this formula to pick. Anyway, I remember the Broncos and Seahawks going first and second. After that I don’t remember much. I think I just blacked out or was possessed by some sort of demon.

What I do remember is taking the Texans at #3. To be fair, it seemed like a great idea at the time. Try to disagree. Play the Jaguars twice. Play the Titans twice. Play the (what I thought to be overrated) Colts twice. Arian Foster. Andre Johnson. JJ Watt.

“But what about Matt Schaub?”

You can go straight to hell, how about that? I was supposed to know that this guy was going to throw a pick six and just have a complete mental breakdown? I’ve seen Carrie in Homeland hold her composure better than this idiot. My God Matt, you went to UVA. YOU’RE A CAVALIER DAMNIT! I have no idea what that means, but TURN IT AROUND YOU BUM.

The next pick comes at 13. Maybe I knew this league wasn’t for me when I sat there thinking, “man, I wonder if the Saints will be forgotten and fall to me?” Quite possibly the dumbest thought to ever pop into my head—well, except for that one time I was convinced that the Carson Palmer trade wasn’t as stupid as everyone said it was. Jesus, Joseph, and Mary I’m an idiot.

So pick #13 comes around and I’m happy to see two teams there that I was hoping would fall. Got to weigh the options here: who’s got the easier schedule, which QB do I believe in more? I’ll go ahead and give you a few seconds to try and figure out the two teams  I was picking from….

If you guessed the Giants and Steelers, congratulations, you’re just as stupid as I am.  The positive note on this is at least I took the Steelers. We know the story here so let’s move on.

Preparing to pick my final team with the last pick at #30 I’m assuming I’ll have the Raiders, Jets, and Jaguars to pick from. Two teams are left out of the pool due to the 10 people with three teams each format. By the time my pick comes up, my email inbox is blowing up with emails saying “Just pick the Raiders already, you bitch” and “Take Oakland and just get it over with, you punk bitch.” If you didn’t know anything about me and just read this paragraph there’s a good chance you’d think I was a bitch (and/or you still do). Can’t please everyone, right? 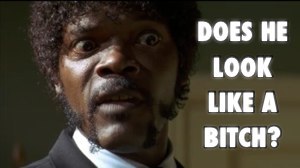 So this puts me in a spot where NOBODY wants to be, picking between the Jets and Jaguars. I mean, this is basically like having been given the option of watching the WNBA or figure skating. I really don’t want either, but at least figure skaters aren’t ghetto and butch? Tight spot. What would you do? This decision literally came down to four QBs which is a problem in itself.

Geno Smith? I think he sucks.

Mark Sanchez? I know he sucks.

Blaine Gabbert? I know he sucks. 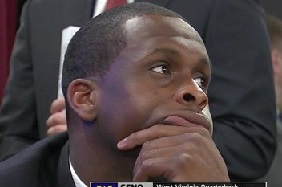 Wahhh. I’m only going to get drafted in the 2nd round. Wahhh. GROW UP

In six weeks of play, with three teams, as you now know, I have three wins TOTAL. The two guys leading the league both have 13 wins. I’ll be lucky to have 13 wins all year. Hell, I’m doing SO BAD in this league that I would literally have a 5190% chance of doing better if I were to just have closed my eyes and pointed down on a sheet of paper listing all 32 teams. That (now dead) octopus in Germany picking World Cup winners would have beaten me in this league. Hands (tentacles) down.

This is easily the lowest moment of my fantasy sports career. I’m embarrassed, but I needed to get it off my chest. Thanks for listening and your concern.

After all, that’s what family is for, you guys.