It is week eight already which is sad because football season is more than half over but it also means we are starting to get to the good stuff. The good stuff this week is in the form of a top 5 matchup between Florida St and Clemson in Death Valley.

Big games like this come around a few times a year and sometimes they live up to the hype (Bama/A&M this year) and sometimes they don’t (Bama/LSU in 2011). Either way I am a sucker for the big atmosphere and the hooplah especially when the game is on campus and not a neutral site. (Now I assume Clemson will show off their entrance as they did versus UGA earlier in the year as they should because you always need to be recruiting. Kids at home have to see what Clemson has to offer.)

The game itself has all the makings of a classic with two big name QBs in Tajh Boyd and Jameis Winston and two offenses that can produce TDs in rapid succession. The only worry is FSU is favored by three on the road with a freshman QB which seems odd but those guys in Vegas now their stuff. Either way it turns out I hope you are able to clear the schedule Saturday night, grab a drink and enjoy everything that is great about college football…

Start the weekend with some hate

7pm Pens at Flyers NHLN: Yes I am putting hockey on here but if you want to get your weekend of hype and hate flowing might as well start with these rivals. The Flyers are struggling and have already fired their coach so the Pens would love to pile it on. (As would I)

730pm Miami at North Carolina ESPN: The other undefeated team in the ACC gets to kick off the weekend against a disappointing Tar Heels team. A win here for the Canes could set up another hyped game against the Seminoles in Doak in a few weeks. I will try my best not to hype it up if that happens.

830pm Seahawks at Cardinals NFLN: Battle of the birds in the desert. The Seahawks are a different team away from home so an upset is possible.

8pm UCF at Louisville ESPN: Everyone in the national title hunt will be pulling for the Knights just so Louisville can be taken out of any hypothetical discussions. College football is king of hypothetical scenarios and I am for sure a culprit of this.

Flip the Channel Dodgers at Cardinals: You can watch Clayton Kershaw pitch which is worth it

9am College Gameday live from Clemson: The crowd should be good and liquored up 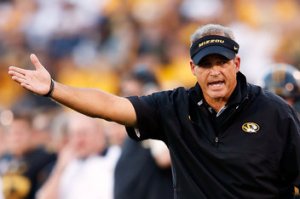 Noon UGA at Vandy CBS: The good folks at CBS did not see the Missouri upset happening so this is the game they will be covering instead of Florida at Missouri which is only online at ESPN3. (I am sure it will get picked up by some random local station in your area but if you want it for sure get the ESPN3 app. (I am now a spokesman for ESPN. Yuck))

You should be watching Kliff: Texas Tech at WVU FS1: WVU hopes to spoil TT unbeaten season like the Red Raiders did to them last year. I have no plans to go to this game but now that I realize I could see Kliff in person I am actually considering it. (I am not sure how I would be received in Morgantown as a screamed like a teenage girl seeing her favorite boy band.)

1pm Canucks at Pens NHLN: Luongo comes to the Burgh. I hope he has some good comments about his stay in Yinzertown.

330pm UCLA at Stanford ABC/ESPN2:  Nice of these guys to leave the stage for FSU/Clemson at night. Stanford needs this in order to not fall out of the Pac 12 North division race and UCLA can become a National title contender with a win and set up a monster game in Eugene next weekend.

Manziel Watch: Auburn at Texas A&M CBS: I bet Gary Danielson will lose his mind as each of these teams run 80 plus plays and play an awesome game of football.

Flip the channel: BYU at Houston ESPNNews: My name is Michael Roarty and I am addicted to college football

I am going to yell at the TV for three hours: Indiana at Michigan BTN: Dont watch this

One eye on the enemy: Iowa at OSU ABC/ESPN2: I will flip here during commercials and try and convince myself we can play with OSU because I have a sickness.

430pm Tigers at Red Sox FOX: Wait, the Michigan game and Tigers game will be on at the same time? Do the sports Gods want people to kill themselves?

Flip the channel: USC at ND NBC: Avoid hanging out with ND people on Saturday so you don’t actually have to watch this.

Lots of offense on Saturday Night

Baylor Watch: Iowa St at Baylor ESPNU: They need to score 90 points to get their average back up. I think they might do that

8pm FSU AT CLEMSON ABC: YOU ARE LOOKING LIVE AT DEATH VALLEY IN CLEMSON, SOUTH CAROLINA!- me to myself about 1,000 times this week.

Flip the channel: Wisconsin at Illinois BTN: I am joking, do not watch this

Pac 12 Nightcap: Wazzu at Oregon and Oregon State Cal. Not sure what to do since I have jumped on the Sean Mannion bandwagon but have loved the Ducks since 2010. I will probably be really conflicted Friday November 29th.

430pm: Steelers vs Ravens CBS: It has certainly lost its luster but as win and at least the Steelers can say they beat Baltimore.

8pm Tigers at Red Sox (if necessary): I assume Ortiz would hit a walk off if it gets to a game 7 just to drive Tigers fans insane

830pm Broncos at Colts NBC: Peyton returns to Indy. You may or may not hear about this game this week.

730pm Avs at Pens NBCSN: Patrick Roy comes to the Burgh. (Do not watch the the MNF game.)

Enjoy the games everyone. Lets yourself get doused with hype.