Yesterday @Ju_2x and myself kicked off our NBA preview  in 140 characters or less with the Atlantic Division. Today we bring you the division that produced the back to back NBA champion Miami Heat and a team in the midst of an identity crisis. The Charlotte Bobcats/Hornets, The Charlotte Bobnets, or are they the Charlotte Horcats i am confused. That division ladies and gentlemen is the SouthEastern Division. 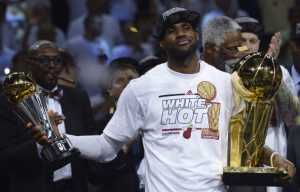 @its_what_ev: Lebron wants to be on the same level as Kobe and Mike. The best way to do that is 3peat. I think Lebron gets it done & wins his third ring

@Ju_2x: The class of the division they will not be dethroned this year. Their size depends on the health of Greg Oden…. no size, no 2014 Finals.

@its_what_ev: Al Horford is now officially a franchise player & a top 5 Center in the NBA. I dont believe in Teague but like Schroder and Milsap, 7 seed.

@ju_2x: The mediocrity of the Hawks can’t get anymore mediocre, with the loss of JSmoove lets see how their new sleeper players mesh with their core

@its_what_ev: The wiz are my surprise team this year. John Wall played as well as any PG in the league the second half of the season. Beal improves 6 seed

@ju_2x: They could be really good, or just as bad as in previous years. Let’s see if John Wall can make Mr. President a season ticket holder.

@its_what_ev: This is a terrible team *Charles barkley voice * MKG cant shoot, Al Jeff got paid and wont care. At least Kemba can break an ankle or two

@Ju_2x: As everyone already knows, ’92-’93 Jordan would have to play for this team for them to have a winning record, let alone make the playoffs.

@its_what_ev: im in the minority but I am not a fan of Oladipo. Cant shoot overrated on ball defender & orlando wants him to be a PG. O/U 20 wins for ORL

@Ju_2x: 2nd overall pick, Victor Oladipo, will be the only player being watched on the Magic. Their fans can go into hibernation for the next year.