I originally wanted to do the 2003 version of this game but the only thing I could find on the web was Lee Evans out and up. Seeing as that is the only real play of the game to mention besides Robert Reynolds choking Jim Sorgi I figured it was alright if I found another game to review. 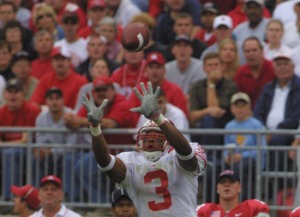 Since I certainly wasn’t going to review a game in which the Buckeyes won I only had so many to choose from before I stumbled upon the 2001 version of this game. The uploads of this user also includes lots of snowmobile videos and Packers preseason highlights so you know this person is from Wisconsin.

You will also find as you watch the highlight of this game that this guy loves to show highlights of punts. Seeing as Tressel is the coach of OSU this makes sense and clearly this man is a special teams aficionado. First time I have ever seen one of these feature so many punts…

The Situation: The Badgers had already lost back to back games against Oregon and Fresno State teams led by Joey Harrington and David Carr respectively. OSU was under first year head coach Jim Tressel and came into the game 3-1 with its lone loss out on the West Coast against UCLA. Still the Buckeyes came into the game coming off a nice win against a ranked Northwestern team. All was looking good for OSU except Steve Bellisari was their QB.

Where Was I: Michigan had just beaten Purdue at home at Noon so presumably I was a very content Michael, not yet knowing Jim Tressel’s full powers. If I only knew.

:10: There he is in his grey vest. SOMEONE ARREST HIM FOR SOMETHING

1:13: I have never seen the National Anthem in the highlights before. This man loves America. And Snowmobiling.

2:05: Steve Bellisari is your starting QB and he immediately takes a sack. Fun Fact Bellisari was actually drafted. Yes that is a real sentence.

2:30: Mike Nugent makes the field goal; 3-0 OSU. Tressel would have an awesome kicker his first season as coach. I am sure this was the crown of his 2001 class.

3:30: Wisconsin’s QB is Brooks Bollinger who is now Pitt’s QB coach. This makes me both happy and feel old at the same time.

3:45: This user included a clip of a failed downing of a punt inside the 5. This man loves punts.

4:25: Chris Vance with a nice catch. I forgot about this guy. He and Kenyon Rambo were quite the pair.

4:40: TD Buckeyes, Lydell Ross; 17-0 OSU. I liked Lydell Ross which means I assume OSU fans hate him. Good thing Clarett was only there one year and we got Ross the last two.

5:40: A horrible Bellisari INT. It was only a matter of time.

6:35: Wisconsin misses a FG, how on earth do they win this game?

7:15: Anthony Davis scores to make it 17-7. It is 12 years later and I am already mad at whoever the Wisconsin OC was for not getting him the ball earlier. How is this the first time I have seen him with the ball?

8:30: Absurd Lee Evans grab. It is too bad he was in Buffalo for most of his NFL career

9:25: Back to back Punt Highlights! This is phenomenal and so B1G.

9:40: Another sweet Lee Evans grab. This is the strangest highlight tape of all time. Lee Evans and punts.

11:45: Holy crap Mike Nugent actually missed a FG. He must be a freshman

13:28: The game ends as it should with 4 horrible Bellisari passes

Fallout from this game: Honestly nothing. OSU went 7-5 and Wisconsin went 5-7. That was awful. I doubt we see anything like that tomorrow where each team should be able to score more than 21 points. Now I need to go erase this game from my memory