Week 4 of 6Rings Pick’Em, and would you believe that after three weeks, five of six writers are above .500? I haven’t done any research but I’m almost positive that’s better than any collective effort coming from an ESPN, Barstool, Bleacher Report, or Yahoo Sports. How 6Rings Pick’Em hasn’t gotten its spot on Colin Cowherd’s “The Herd” yet is pretty astonishing considering his 3-11-2 record on the year.

After last week’s abysmal lineup of games, this week returns with some very intriguing matchups and a lot of agreement from the 6Rings sharps. Three of the six games this week have a five to one consensus being Oklahoma, the Bears, and the Broncos. I’d personally like to thank everyone now in advance for giving me the +1 advantage on the ND/OU game. OU a 3.5pt road favorite? Give a damn break Bovada. How do you even make money as a site?

I digress. The bigger stories this week are the emergence of Evan and the debut our new playing partner Frank. Glad to see the fire that I lit under Evan got him going. Although this is a competition, we are a team. Above .500 as a team leads to our own spot on the public access channel. Public access channels lead to Spike TV. Spike TV leads to at least more Twitter followers.

If Frank goes undefeated this week, he’s kicked out. Period. 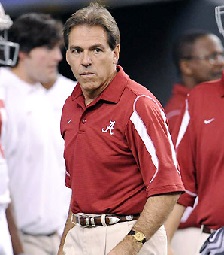 I DARE you to bet against this man. It’ll be the last thing you do.

Guarantee is such a strong word. Guarantee shouldn’t be .500 and it shouldn’t be leaving us to pay juice. But come on. I mean, Ryan Tannehill’s (what I assume to be his first) fourth quarter comeback? How unlucky can you be?

I can’t promise you guys (gals? Probably not, but got to be PC, you guys) a 3-0 every week, but what I can promise you is for me to not look at the past, but to only look toward the future. To give you all a fearlessness, persistence and winners that you deserve. And I promise you this, I will NEVER put you in a position to bet WNBA Playoff basketball like BigCat over at Barstool. Now that’s rock bottom.

This is rock bottom.

The hype surrounding Ole Miss is too much. Am I writing them off as a good team? Absolutely not. Do I think they are getting more credit deserved for a young team heading into Bryant Denny Stadium. Absolutely. Alabama wins by 20+.

Terrelle Pryor is most likely out for this game, but it shouldn’t matter as the Redskins defense gives up 155 yards rushing per game and the Raiders have the third best rushing attack in the NFL. I just can’t pass up on getting 3.5pts versus the league’s worst defense who just happens to have to fly cross country to play.

Who are your locks this week? Tweet them to me @_TC18_