Michigan had a bye this week and yet it was still frustrating as all four of their previous opponents lost as did their opponent this week. (Minnesota) Not an encouraging sign at all but at least I am not Lane Kiffin.

Sunday morning we all awoke to hear the news I think everyone expected at one time or another. While Mack Brown has had his struggles at least he can say he had done something at Texas as head coach. All Kiffin could say is he helped co-call plays under Pete Carroll which considering all the talent they had at that time couldn’t have been all that hard. (Give it to Reggie Bush. (Yes I am happy he has revived his career with the Lions.)) 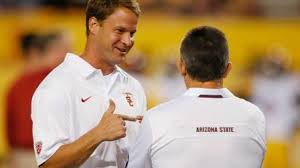 “NO EVERYTHING IS FINE”

It had gotten so bad at USC about Kiffin that recruits were genuinely happy to see him go and say now there is a better chance they will send up in LA. Once Kiffin lost the ability to recruit there was really no reason to keep him. Add that to the fact that UCLA is now a viable program and AD Pat Haden had to cut bait now not just for the long term but for this season as well.

Interim coach Orgeron (more on him in a bit) already has stated they plan on opening practices back up to the media and actually talking about injuries. I understand they won’t be able to duplicate the success exactly as they did under Carroll but at least the players will have fun again. And ultimately what makes USC attractive to recruits is that “fun” and rich tradition that really no other school in the country can provide. They might be able to have one or the other but not both.

I am not sure who will be the next head coach there but it will be fun to watch the coaching search because they are always fun when it isn’t your school. (Looking forward to USC tracking planes.) I am pulling for Chris Peterson to finally make the leap to a BCS school or for the Trojans to take a chance on 49ers OC Greg Roman. As long as it isn’t Jack Del Rio I will be happy. On with the rest of CFB…

1. OSU: Someone learned how to throw downfield. Braxton had his moments prior to Saturday but his accuracy on the deep passes was terrifying as a Michigan fan. The run game didn’t have as much success because Chris Broland and Wisconsin was selling out for it but still it was a good performance from the Buckeyes. Only downside for OSU was their pass defense which took a hit with Safety Christian Bryant being done for the year with a broken ankle. The B1G isn’t stocked with elite passing games but they will have a test at Northwestern this weekend. Win that and they should be unbeaten coming to AA in November.

2. Wisconsin: I was impressed with Stave and Abbrederis. Like most I figured Wisconsin would have to run to win but their passing game was legit and had it not been for a bunch of errors (like giving up a TD with 1 second left in the half) Bucky might have won this game. It sucks even more now that they lost to ASU because now Wisconsin will have to win out to make a BCS bowl. Had they beaten the Sun Devils a 10-2 season and a BCS at large would have been much more feasible.

3. Iowa: I take back all those horrible things I said about them preseason as Iowa is actually a functioning football team. While they won’t contend for a division crown they can still win seven to eight games. B1G game against Sparty on Saturday. It is at home and will need it with a brutal rest of October that includes OSU, NW and Wisconsin.

4. Minnesota: We find out this week if they were indeed a worse 4-0 team than Michigan. The Gophers looked horrible and its almost as if they didn’t even want the Floyd of Rosedale. They come to the Big House this week and I look forward to being really frustrated as Michigan struggles to beat this team 20-16.

5. Illinois: All those bad things I said about you too, I am sorry. Another functioning B1G team. Granted they just beat Miami (OH) but have looked pretty good starting the year 3-1. They have a sneaky B1G game at Nebraska this week.

6. Purdue: All those bad things I said about Iowa and Illinois applies to you Purdue. They tied the B1G record for worst loss to a MAC team. Granted Northern Illinois is good but still. Long way to go for Hazel and company.

7. Michigan: Bye week city. Word is Glasgow will take over center duties on the OL and Chris Bryant will take the LG job. We will see if this helps the run game. Its the battle for the Little Brown Jug, get excited.

8. Northwestern: Gameday is all set to broadcast from there this week for their game against OSU. Win and NW will be the favorite in the division, lose and all the pressure builds on them to win in Madison the following week.

1. Orgeron Back: So glad to have him back. (LSU Freek is happy) 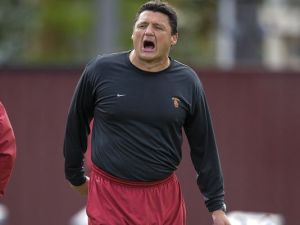 2. LSU/UGA: So nice when a game lives up to the hype. It helps that both teams lost so much on defense to the NFL so that the offenses could score. Some of those throws Mettenberger made were insane and make me wonder where the hell was that last year.

3. Bama: They got to play boring Saban ball and I am sure he loved it.

4. Oklahoma: Nice win over ND as they used Tommy Rees turnovers to win. I have heard that before. Also I don’t mind Brian Kelly telling players not to sing the alma mater after a loss although I am sure some ND people will hate it.

6. Pac 12: Things are shaping up to be a three way battle in the North with Stanford, Oregon and Washington and a battle in the South with both Arizona schools and UCLA. One downside to being back on East Coast time is how late these games go. That and I am getting old.

7. Oregon St: Also quietly the Beavers have bounced back from their opening weekend lost and QB Sean Mannion is on a torrid pace. Pac 12 football is just too much fun for my B1G heart.

8. Best plays of the weekend: Kentucky with their homage to Les Miles and Bert Bielema falling down. I can’t stop watching.

9. BAYLOR WATCH: Another Bye week which is kind of weird. I actually heard Art Briles on the radio last week and he sounds like the most Texas man of all time. If the Longhorns don’t at least look his way they are hopeless. (Unless the actually do get Saban.)

10. Kingsbury Watch: Also on a bye week. They play Kansas this week in the meeting of totally opposite head coaches.

11. WVU: No idea what to make of the Mountaineers but it was a big win for Holgo and company. Their defense is actually legit but they might have a tough time against Baylor this weekend.

12. Missouri is the only unbeaten team in the SEC East: Plays Vandy this weekend in the weekend of sneaky big games.

13. Zombie Big East is horrible: UCF had a nice half but eventually lost. No way Louisville makes the Nati unless everyone else in every major conference losses 2 games. Not likely.

14. Famous Jameis: Um he is still exceeding the hype. Had this Hail Mary and I found out he can throw a football over buildings too. Looking forward to everyone over analyzing his every move this time next fall.

This week has two bigger games in OSU at NW and Washington at Stanford but is littered with games that matter just because it is the start of conference season and a lot of dominos still have to fall.