Not for me. Not for my Illinois roots. Wisconsin resembles a hate week like many Buckeye fans can’t describe. F@#king Bucky. This game just really gets my competitive juices going more so than most.

Last night I laid down to bed early at 10pm to get up for a 3am flight. Smart move right?

I couldn’t sleep. My heart started racing. Maybe it was the copious amount of Starbucks that I had to get through the workday? Maybe it was the two-four vodka drinks I made myself to unwind before my impeding work trip? Maybe 10pm was just too early? All these are logical justifications for my unease but I knew it wasn’t the case.

Thoughts of the Silver Bullets (OSU’s defensive nickname for you haters) hyping up the crowd at the horseshoe on a pivotal defensive play, Carlos Hyde attacking the line of scrimmage with furiously that the 2013 season hasn’t seen yet, Dontre Wilson catching the ball in the pivot and taking it to the house, Kenny G & Braxton Miller dominating a perfectly called Tom Herman offense, Noah Spence absolutely murdering Stave on Wisky’s lone pass attempt of the night, and of course the Horseshoe decked out with 108,000+ screaming fans decked out in Scarlet were all thoughts racing through my head. 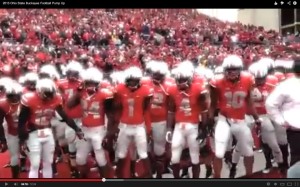 I mean, how can any Buckeye fan possibly sleep after thinking about that? So naturally I did what any fan would do. I turned on the DVR, watched about 30 minutes of a previously recorded OSU victory blowout and took to social media to start talking shit to whoever was up for an argument.

Needless to say a 10pm lights out quickly turned to a 12:15am bed time followed by a 2:45am wake-up call. Guess what, not phased one bit from the lack of sleep because from now until Carmen Ohio is sang on Saturday night it’s pure adrenaline. Yes, because it’s Bucky week.

Why is Bucky week so important to me?

Now throughout these last 10 years, I’ve had the chance to get to know the University of Wisconsin and the types of fans that they have turned my friends into. In honor of them and my hate of Wisconsin, I present to you the top 10 reasons why I hate Wisconsin and Wisconsin football:

10. “1st  and 10 Wisconsin” – Okay, if you think the O-H-I-O chant gets annoying at the Horseshoe, you’ll want to stab yourself in the ears with a steak knife if you go to Camp Randall as a visiting fan. For those who don’t know, every time Bucky gets a 1st down you hear the chant “1st and 10 Wisconsin” in the most god awful Wisconsin accent with 85,000+.

9. Most Badger fans are also Green Bay Packer fans – Do I really need to explain this one any further. Green Bay Sucks (Waddle & Silvy Voice for my ESPN 1000 listeners)

8. Teach Me How To Bucky – This really should be #1 but because it’s not that important it gets kicked back. Jim Delany should have credited Wisconsin with at least 1 automatic loss for this awful attempt of Wisconsin trying to mimic the ever so talented “Supwityougirl” gang from Oregon. We get it America, technology and music have now become more user friendly than ever to make awful music videos. But that doesn’t mean it should be done. When they look back at the downfall of America and society in 100+ years, the premier of this video will surely be one of those teachable, polarizing moments when America and quite frankly the world, changed for the worst.  Worst.Video.Ever https://www.youtube.com/results?q=TEach+me+how+to+bucky&espv=210&es_sm=93&um=1&ie=UTF-8&sa=N&tab=w1

7. Bunch of Bros… – I think it’s possible that Wisconsin wrote the unofficial bro code about 15 years ago. Being a “bro” is cool nowadays…I guess. If you have a crappy “brodar” all you need to do is go to any college campus, test out the Greek life scene, see how much medicinal is being used and also look at the types of cars being driven around by American students and you’ll get a sense on how much bro infiltration there is. Now that you know that, go up to Madison and check it out. Not only is it “bro-central” USA, you’ll see an abundance of child sized NBA jerseys from the 90’s combined with snap back hats, a heavy cloud of marijuana smoke and of course a total abundance of … wait for it… “BROOOOOOOOOOOOOOO”.

5. Bret Bielema – Is there anything worse than Bret Bielema. Bret was the type of creeper because he seemed like that type of coaching personality that would also ask his star player if he could tag along with his crew the night after a game. The only redeeming qualities about Bret was his smoking hot wife and his crappy coaching ability that would surely credit OSU at least 2-3 wins by default.

Look at Fat Bielema Trying To Be Cool

4. Jump Around – Skip this song every time I hear it on my “Whoop there it is” Spotify playlist just because it reminds me of Bucky. Sure it was cool back in 1998. But it’s now 2013 and it’s way overplayed. I’ll only allow this tradition to be celebrated if you are a Wisconsin student or alum, otherwise get this song off my headphones and quarantined in Badgerland.

3. Rose Bowl Losses – Bucky fans were so mad that OSU was getting all of the Big 10 love after losing in the national championship during consecutive seasons. They thought that they should have the chance to go to a BCS game because they thought they’d win. Well you had your chance…actually you had three chances and you screwed up every which one of them. Don’t talk down to any major power until you can pop your cherry and actually show you are a legit program.

2. No One Cares About Wisconsin – Wisconsin just wants a rivalry that can be considered equal to Ohio State & Michigan. Since Minnesota will never be an elite program, Wisconsin feels that they are invited into the OSU vs. UM party by default. Wrong. I respect that they want to be heard every year and everyone at tOSU & UM sees the Badgers as a challenge, but they will just never be considered a top rival and this deeply disturbs Badger fans. So I guess people do care about Wisconsin, but they are like the middle child in this family. Sorry, just wasn’t rooted that way for you, can’t change it.

1. The “Wisconsin Way” – What is this? The Wisconsin way is the strategic approach to playing sports that involves the most boring, vanilla and borderline offensive way to play your opponent. Want high flying, intense basketball? Don’t watch Wisconsin play anyone. Want a football game with a dynamic passing attack, a running QB and tons of points in a rivalry game? Don’t watch Wisconsin. But if you are the type of person that enjoys tucking your shirt into your pants and pulling your pants above your belly button as you sit down into your chair with your glass of 2% milk then watching Wisconsin might be for you.

Needless to say Saturday night should be interesting. Go Bucks!!! Coming out party for the 2013 season!