We get four matchups between ranked teams this week so I hope you did all your yard work last weekend. I don’t think it is time to rake leaves yet but I hope you at least picked up those sticks in your yard. Can’t be having sticks just lying around hurting the squirrels.

Anyway, best part about this weekend for me is that Michigan has a bye so I have nothing to stress out about. (Although if a team could find a way to struggle against a bye week this Michigan team could do it.) I get to just sit back and enjoy the football and get mentally prepared for the first Pirates playoff game in 21 years early next week. Lets do this…

730pm Virginia Tech at Georgia Tech ESPN: Yes Va Tech will be wearing these stone helmets. No I don’t understand everyone having to wear different uniforms and yes I understand this makes me sound old.

830pm 49ers at Rams NFL Network: Normally I would get excited for this matchup because I get to watch the 49er offense versus Tavon but these Thursday games are usually sloppy so I expect another ugly Kaepernick performance which is no fun. Thanks Godell.

705 Pirates at Reds Root Sports: Last series of the year and the winner of this series will get home field for a one game playoff. All I want is one playoff game at PNC Park so this is huge.

9am Gameday from Athens: Fargo was epic last week and the only way to follow it up is to go to one of the best campuses in America in Athens, GA. My guess for celebrity pickers is Outkast.

Noon South Carolina at UCF ABC: Underrated game of the weekend. UCF beat PSU and is for sure a threat to beat South Carolina. Win this and the Knights vs Louisville Friday night game might get some hype in a few weeks. Unfortunately, I will have to watch this on my computer thanks to the Pitt game, way to go WTAE.

Flip the remote Pirates at Reds: Just trying to reiterate its a big series

Also on: Oklahoma St at WVU ESPN: Wtf #HOLGO? WVU scored zero points last week. I have no idea what is going on. Did he give up redbull?

330pm LSU at UGA CBS: Huge game for both sides but for different reasons. For UGA this would get them all the way back from their Clemson loss early on and sets them up nice the rest of the way with a cushy schedule. For LSU this is just the start of their tough slate which still includes Bama, A&M, Florida and a tough Ole Miss team. Win here and go ahead and start that Bama/LSU hype again.

Flip the remote Oklahoma at ND NBC: Historically ND owns OU probably more than any other school could own OU. This includes last year’s 30-13 win for the Irish in Norman last year. The Belldozer will try and reverse the trend.

630 pm Ole Miss at Alabama ESPN: Ole Miss has had a real nice start to their season that includes a big win in Austin over Texas. This, however, is a much bigger test than UT. Win this and Ole Miss is on the map. For Bama they have looked so so for them which means they are still awesome.

Flip the remote Arizona at Washington FOX: All of the offense

Manziel Watch: A&M at Arkansas ESPN2: It is too bad Bielema is here and not in Columbus. He was such a good villain.

8pm Wisconsin at OSU ABC: The first of back to back tough matchups for the Buckeyes. As mentioned earlier this doesn’t have the same level of hate with Bielema in the SEC. Still a good first glimpse into who is the best in the B1G.

Flip the remote Cal at Oregon Pac 12 Network: Hopefully this will be shown on some network in your area because this will be quite the game.

1pm Steelers vs Vikings in London: You sound like you’re from London

Flip the Remote Pirates at Reds: Pittsburgh folk should tune into this but the NFL owns this country so I doubt it. 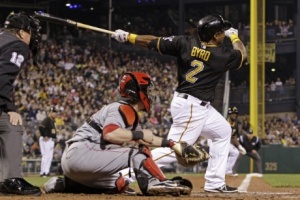 830pm Pats at Falcons NBC: The Falcons need this game after falling to 1-2 last week.

830pm Dolphins at Saints ESPN: The Dolphins are one of the best teams in the NFL so far which says a lot.

Enjoy the games and get ready for October.