It’s not that I hate the SEC. It’s also not that I don’t respect the SEC. Both of those statements are entirely false. I respect the SEC for everything they’ve accomplished in the last seven years. I mean how can I, a writer for a blog called “6 Rings” even consider hating on a conference that should be renamed “7 Consecutive Crystal Balls”? See what I did there…

In actuality, I think the south is amazing. While I’ve never wished to have been born a confederate, there is so much deeply embedded in the culture of football, tradition, hospitality, weather & the way of life. If those things are important to you, like they are me, I would also suggest that the South has it right when you compare it to the way of most Yankee states.

But one big misconception that is just flat out annoying is the notion that the SEC has football truly “figured out”. Let’s not confuse the genius of few as the mastering by many…

Elite football coaches have the game figured out and it just so happens that the SEC has had the good fortune to house these coaches in their conference during their run.

Elite coaches are simply the difference. It’s not the goal of this piece to spin a pro-OSU article because Ohio State now has Meyer. Rather, it is to identify a huge factor that goes overlooked every day in the reason why the SEC has become this glorified conference.

In the spirit of being the most fair to the accomplishments of the SEC, it’s not right to speculate at the other outside variables that have led to their seven titles in a row (i.e. NCAA’s ruling on Cam Newton, UCLA beating USC in 2006, consequently letting Florida go to the title game, etc…). There are really only two variables that any athletic program can control in paving their destiny: talent and coaching the talent.

Most of the south has the good fortune of being able to play this game year round. It’s in the blood. It’s in the culture. Hell, I would even argue that it’s in the Bible. Just think about what the long-term effects are of having a culture where young men can go step outside and play 7-on-7 in January where it’s 55⁰ and sunny? Us northerners really have to put our thick skin on to consider doing the same in January when it’s 0⁰ in blistering wind and snowing at that same time. Naturally you cultivate a culture where there is more motivation & spirit to compete at the next level.

But, is talent really the silver bullet? Big 10 schools have been going down south and stealing recruits from the south for years. Just look at OSU & Michigan’s incoming recruiting classes. The real silver bullet is whether or not there is the presence of an elite coach.

As a fun exercise, let’s pretend that Urban Meyer, Nick Saban & Les Miles coached Ohio State, Wisconsin & Michigan over the last decade. Would we be celebrating seven consecutive national championships for the SEC? While that will never be answered, objectively can anyone truly say the answer to that question is yes?

Ever since 2002, Ohio State fans just thought that Jim Tressel was the best coach in the country. That all changed when the Buckeyes went on their famous run of losing consecutive national championships, a Fiesta Bowl to Texas and then back-to-back non-conference games to USC. The slew of losses couldn’t be any more obvious that the sweater vest lost a step. His teams weren’t hungry enough or mean enough to win the big one. Morale was down as was confidence.

But when Meyer stepped in for the 2012 season, as a fan, I noticed a change in the program and the system. He installed a mantra of being a “mean football team” and an “angry football team” and he reminded his talent exactly what it meant to be a part of The Ohio State Buckeyes. Ohio State nation will tell you that it showed last year on the field from week one. The change was noticeable.

Hey Alabama, does this system change sound familiar before and after you had Nick Saban? LSU, what were things like before Les Miles? Florida, do you agree that this was what things were like after Spurrier and before Meyer?

Every elite team has their peaks & valleys in success and lack thereof as things are always in a constant state of change.

When talent experiences success in sports they feel unstoppable and that nothing can knock them from the throne. The talent does the dirty work of playing the game and doing the work necessary to achieve the goal. But the talent goes nowhere without the system, the discipline and the leadership of the coach and the coaching staff assembled. 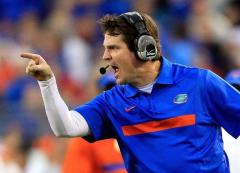 Are the only coaches cited in this article the ones deemed as the “elite group”? Certainly not. Every coach has the opportunity to rise up and prove themselves. Guys like Will Muschamp, David Shaw, Brady Hoke and Bill O’Brien are amongst the top of that list ready to contend for the throne.

But as we look at what has really transpired over the last seven years, has any SEC team won a national title without the presence of an elite coach (omitting Auburn from this for obvious reasons tied to $200K & the payment of Cam Newton)?

The answer is simply no. If seven different teams in the SEC won national titles in seven years it would be a different discussion. But for now, hearing any program in the SEC not named Alabama, Florida, or LSU cling to the notion that they are simply better in talent and prestige than an elite Big 10, Pac 12, Big 12 or ACC teams just simply doesn’t cut it. Alabama, LSU, South Carolina or Florida all can contend for a national title this year, and they might win. But, as coaches begin to relocate elsewhere, look for the crystal ball to do the same.