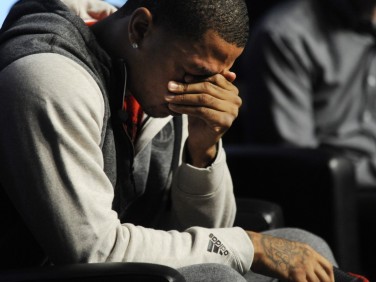 If you are a loyal follower of 6 Rings, I first want to thank you for your support. But secondly, I want to voice some reason for the lack of consistent content in the recent weeks. See, the end of 2013 and the beginning of 2014 have been, for lack of a better word, shitty. We started 6 Rings to create a place for passionate fans and creative writers to voice their opinion on the teams and players that they care about most. When we started the site in August, we were on the top of the Sports Mountain. Let’s take a look at what a bright future we, as fans, had heading into Q4 and the start of 2014.

We diehard Bulls fans spent a whole year down in the dumps in 2012-13. From being so close to where the team needed to be, we had to watch Nate Robinson try and lead a defeated Bulls team through the playoffs. We wrote, we talked, we dreamed about our Savior, D-Rose coming back on the court and wondered whether or not he would be the same player. We hoped that he would take us back to the promise land and make this season one to remember.

A revamped Chicago Bears offense was set to take the field. After a dramatic 3-0 start where Jay Cutler lead two fourth quarter game winning drives, Da Bears were the team to watch out for in 2013-’14. Could Marc Trestman lead this team to the playoffs and, don’t say it, the Super Bowl? Let’s just say we were riding a nice wave of offense success that we had never seen before. The Bears had an offensive line (A real one), a franchise quarterback and running back, and three legitimate receiving targets. Needless to say, this was refreshing and gave us fans hope entering the season.

Just kidding. THIS IS OUR YEAR.

Coming off of a 12-0 season in Urban Meyer’s first year as head coach, what was there not to look forward to? The campus was buzzing, the team was preseason #2 and the team no longer had a bowl ban looming over them. This was the year. Buckeye fans have flirted with a National Championship and also hit rock bottom. They won BCS bowls and also got restricted from going to one. This was the year. A hungry, talented Ohio State team was going to be our main focus as fans this season and they had the schedule that would allow them to go undefeated once more. This was the year…

After losing Deshaun Thomas, some Bucks fans may have been weary. I was jumping for joy. I loved @DT1UPNCOMIN but man was he a dumbass. I’ve never felt such frustration/love for a single player in my life. Regardless, he was out and a talented, veteran team lead by Aaron Craft was set to make a run at it this year in his final season as a Buckeye. The expectations were not out of control, but everybody knew this team was experienced enough to make a run.

Where We’re At Today

Now you see, laid out piece by piece, how motivation can be lost. When you’re in the mindset of “Championship or bust” for the majority of your sports teams, it can be a long fall from the top. As a matter of fact, I think I’m only about halfway down from the top of my fall. It’s OK, though, because during my long free fall to sadness I’ve come to peace with this season of failure. After all, I am a Cubs fan.

Just for shits and giggles, lets look at how my butthurt season from hell wound up…

Well we all know how this story ends. To avoid further sadness, I’m going to assume you all know the tale. Season=gone. Bulls enter tank mode by trading away Lu and what’s worse is that its NOT WORKING. They are playing their best basketball and Jimmy Butler is wearing down his 25 year old legs playing 60 minutes a game…literally.

Ahh. What a whirlwind season for the Bears. Like I mentioned above, the Bears started off 3-0 and the city was buzzing. I mean, I remember literally hearing radio DJs and talk show hosts saying that “The Bears are going to the Super Bowl y’all”. Sure enough, that didn’t happen (Bet you could have guessed that one). Cutty went down with the groin injury, then the ankle, then was chastised by the city because of long time backup, Josh McCown (aka the biggest Bears icon since Ditka). Nothing against Josh, but him doing well actually hurt the team. It hurt the chemistry, the relationship between Jay and the City, and it created un-needed controversy.

Well, again, you know how it ended. Bears finished 8-8 and missed the playoffs. Oh yeah, they also had the playoffs essentially signed, sealed and delivered before laying an egg against Philadelphia and then just getting bent over by Aaron Rodgers with :30 left on the clock.

At least we have this…

After winning 24 straight games, our hearts were simply ripped out by Mark Dantonio’s Rose Bowl Champion Spartans. If it weren’t enough that they ruined our hopes at a National title, I had the pleasure of having Winter Break from school immediately after it happened. Why was this a bad thing you ask? Because my dad (aka the arrogant Michigan State fan), is just that. For the next four and a half weeks, I got to wake up to “Michigan State: All we do is win Championships”. Salt poured in the wound.

Once more, you know how this story ends. The Bucks finished the season by losing to Clemson in the Orange Bowl in a game that none of the players actually wanted to play in. When it’s “Championship or bust”, that long fall meant a free trip to Miami for each Buckeye. Not to mention, they HAD to make it a close game with a chance to win on the line. Two straight losses heading into a long, long offseason.

I don’t want to jump on the failure train just yet with this team. They were undefeated heading into last week and then dropped 3 straight games in the B1G. It isn’t time to hit the panic button just yet, but like my brother told me last night: 2014 is going to be the year of the butt hurt Ohio State fan. I hope this isn’t true, but then again, would it surprise me at this point? Absolutely not.

My sports teams let me down big time this year. When you create a sports blogging website, you hope that you are able to have positive things to write about. Well, we did… and then we didn’t. Somebody get me out of this place!