With college football season over now I plan on keeping my Monday grab bag going but with hockey as opposed to football. It will be very similar to the CFB Monday Hangover with attention focused on the league news before heading to the Pens. Good part is I will skip covering the Metropolitan division because I can’t cover any more crappy leagues in detail, the B1G wore me out. 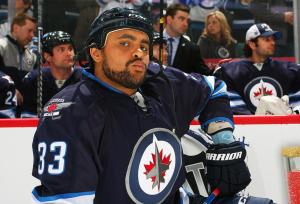 “Hey Paul, where you want me?”

Anyway in the first half of the season I only really paid attention to the Pens because of football taking up most of my attention but my intention with this weekly column is to keep up with the rest of hockey and hopefully keep you guys up to date on everything hockey with the Olympics and the pending playoff run after that. (Or you can just cut out the middle man and go to Puck Daddy.)

League Wide: Anyway lets start with the league wide news and we have another coach firing..

1. Jets fire Claude Noel and replace him with Paul Maurice: This is not shocking as the Jets are in last place in the Central division, lost 5 games in a row and more importantly other teams were basically saying the Jets had no system. Best part of this firing is the players talking and saying how different it is to play in Winnipeg where when the team goes on losing streaks people take notice as where in Atlanta no one cared. Either way the Jets are going with Paul Maurice who was one the youngest coach in the league but more importantly once coached the Hartford Whalers. Maurice will have a good young group of forwards and hopefully he can figure out what to do with Byfuglien who has recently been moved back to forward. Either way the clear issue is getting some defensive structure in front of goalie Pavelec to see if he is actually the answer. This is probably the last we hear of the Jets until the Pens trade for one of their young forwards.

2. Math is catching up to the Leafs: Ever since the beginning of last season as the Leafs were a competitive team the stat geeks have been calling for them to fall back down the standings. They made the playoffs last year and continued to defy the odds at the beginning of the year with a hot start but since the start of December they have won just one game in regulation. Since their Winter Classic shootout victory they have gone 1-4 while being outscored 23-9. If you take a look at their puck possession numbers they are 2nd to last in the league ahead of only the lowly Sabres. Things might be headed south in Toronto the 2nd half of the season.

3. For some good news, the Ducks are dominating: They won 1-0 over the Red Wings last night to bring their record at home to an absurd 19-0-2. They have won 17 of their last 18 and currently lead the league with 76 points. Their only real question is what to do with all of the goaltending they have? Hiller is the guy now but the next great American goalie John Gibson is on the way and will make things interesting in the offseason. Either way they have a big week this week with a home date with the Canucks and then back to back road games against the Blackhawks and Blues.

4. The Islanders aren’t terrible right now: They are actually quite good and have won 7 of 8 and are somehow still in the playoff race despite the fact they lost 10 games in a row earlier in the year. The Metropolitan Division man 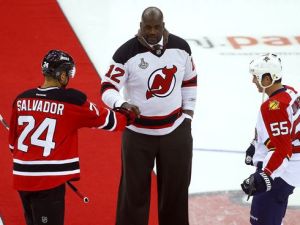 5. Shaq drove a Zamboni at the Devils/Panthers game: No idea

6. Mike Comrie and Hilary Duff split up: So sad

8. Best save(s): Corey Crawford did this with his toe in that game. I thought that would be the save of the week and then Ryan Miller did this against the Caps last night…

Chalk that up as a win for USA

Monday: Canucks at LA Kings 1030pm I know no one will watch this but still

Tuesday: Leafs at Bruins 7pm Just who the Leafs wanted to see when struggling

Thursday: LA Kings at Blues 8pm NBCSN LAK has knocked the Blues out the last 2 years

Friday: Ducks at Hawks 8pm NHLN The two top teams in the league square off

Saturday: Habs at Leafs 7pm NHLN This is an excuse to show this awesome CBC intro 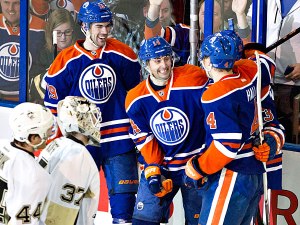 1. Pens got 5 of 6 points on a road trip but Scuderi’s comments are the story: The one game the Pens lost was Friday night in Edmonton and the Pens blew a 2-0 lead going into the 3rd period. It will be interesting to see how the Pens react to this as Scuderi was a part of their 2009 Cup team but then left to go win another in LA while the Pens have been unable to get back to the Final since. Something similar happened last year against Philly in the regular season with Vokoun saying something and the Pens went on a nice run afterwards. Of course those bad habits reappeared in the Isles series so it is a perpetual problem for them.

2. Only one game this week: Against the Caps Wednesday which is weird. They then play 11 in 20 days before the Olympic break.

3. This gives Shero some time: With only one game in 7 days maybe GM Shero makes a move because the Gibbons and Vitale got hurt on the road trip too. Then again maybe he won’t do anything.

4. Megna and Martin are skating: This is good news as the Pens always need bodies. Hopefully Megna can establish himself enough to crack the top 9 on a regular basis.

5. Good roundtable on Kris Letang: He is a topic Pens fans discuss often

6. Root Sports showed Brandon Sutter’s dick: I am sure the ladies loved it

7. Best Pens moment of the week: Crosby set up Letang and then tied it late in Vancouver and then won it in the shootout

Enjoy your Brady/Manning hype this week but remember, there is some good hockey too.