I have been neglecting the NHL around here because I think everyone has been neglecting the NHL. (Most of that is for your entire lives.) But as football season winds down and 2014 emerges hockey will come back into some peoples sports consciousness. Here is an update on what you have missed on the season so far. 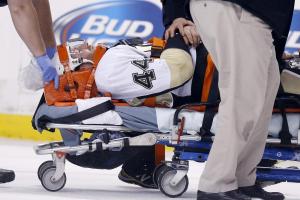 “Damn it Otto, You have Lupus!”

1. The NHL has a concussion problem: Much like the NFL there is a lawsuit filed against the NHL. Add that to the fact players are getting suspended weekly for attacking each other and the NHL needs to figure out what it wants to do moving forward. Shawn Thornton is going to appeal his 15 game suspension which will put the punishment process under the microscope to those outside the NHL. The ruling will be interesting as to how discipline is handed moving forward. (I think the days of fighting in the NHL are dwindling which is a good thing.)

2. HBO’s 24/7 is back for Wings/Leafs Winter Classic: Check out episode one here. Quick recap: The Red Wings are just as boring as you thought and the Leafs struggle with a toaster. Pretty much everything we expected.

3. The Venn Diagram of Hate: Another reminder to read everything Down Goes Brown puts together.

4. Last year I drank with Patrick Kane, the story was good enough to make the internet.

1. The Blackhawks are still the best team: It is a new season and not much has changed at the top. While the Hawks made some changes to their bottom six forwards they came back with all of their core and have scored an absurd 135 goals so far this season. (3.6 per game) The second closest team is division rival St Louis with 112. Despite playing in the superior conference it is clear the path to the Cup still runs through Chicago. I hope this keeps some of the Bulls fans from jumping off a bridge with Derrick Rose hurt again. (I think a lot of them already jumped. WE ARE TOO LATE)

2. The West Playoffs is going to be rough: Top to bottom the 1 to 8 seed of the West anyone could come out and win the cup. It is clear there is a group of nine that will contend for the eight spots. (Chi, StL, Colorado, Minn, Anaheim, LAK, SJS, Vancouver and PHX.) While the Hawks will be the favorite there will be serious competition from each of these other teams. We will see which team makes a move at the deadline to try and give them the advantage.

3. The Jets are not having fun: Winnipeg was the only team to move West and geographically it makes tons of sense but I think they would move back East if they could. They used to be in the Southeast Division which was basically JV hockey compared to the West.

1. The East is still awful: Early in the season it was clear the East was bad and that trend has continued as we are over 35 games into the season. As of now only three teams in the East would be in the playoffs in the West; Pit, Bos and Montreal. Luckily for the other teams in the conference the West won’t get to poach their spots. Instead teams like the Wings, Leafs, Rangers and Flyers who have all struggled will still get a chance to get in the postseason

2. The Sabres and Islanders are exceptionally awful and Buffalo is fine with it: These two teams have a combined nine wins in regulation! (Buffalo got their 4th last night, congrats) Until last night neither has won a game in a standard 60 minute game in over a month. They are both terrible but that is fine with Buffalo who expected to be bad and gets the Islanders first round pick this year. The Islanders traded for Thomas Vanek early in the year in hopes of a boost to get back to postseason but instead have gone back to being the Islanders and now won’t even have a top pick for their horrible efforts. (The Islanders can protect their 1st round pick this year but then have to give Buffalo their pick in 2015 which is the Connor McDavid Sweepstakes. Pick your poison there)

3. Crosby vs Ovie is back on: From the time they both entered the league in 2005 Crosby and Ovechkin were written in as rivals and for a while there they were. But since the Game 7 of the 2009 series the rivalry has gone dormant. Sid had injury problems and the Caps had a few coaching changes. Now the rivalry appears to be back. They are now in the same division and each is clicking at the top of their game. (Each of them is doing things such as this and this.)  The Pens and Caps have three more regular season games and a 2nd round matchup in the playoffs is highly likely as well.

Pens: (This is the part where I talk about the team I follow)

1. The Pens Depth is being tested and is passing so far: The games lost to injuries for the Pens is absurd. They are currently down their top 4 D men, Malkin, Glass, Vokoun, Bennett and have lost both Neal and Engallend to suspensions for 5 plus games. Yet somehow they have won 10 of their last 11 and continue to churn through the horrible division. The key has been the yound defensmen who have allowed the team to contnue to win despite the injuries. Matta, Despres, Bortuzzo and Niskanen have each stepped up. This has shown the Pens depth on the blue line is real and gives them serious assets to move at the deadline.

Olli Matta is fun to say

2. Special teams have been fantastic: Since James Neal returned to from injury in November the Pens PP is clicking at absurd 35% and doing things such as this. Add to the fact the PK is 2nd best in the league despite losing Matt Cooke and all of the injuries. Solid work here.

3. Sid and Geno are still good: This is the first time since the 2009 Cup season that Sid and Malkin have played together 20 plus consecutive games. Now that streak ended with Malkin’s recent injuries but it is clear that having two of the best players actually healthy has made a difference despite all of the turmoil the team has faced. It will be interesting when the two are adversaries in Sochi for the Olympics.

4. A name to remember: Jeff Zatkoff: You non Pens fans are probably wondering who this is correct? This is the Pens backup goalie for MAF this season. Last year’s backup Tomas Vokoun has been out all this year with blood clots and it is not clear if he will retire or not. If so the Pens have to decide if they are comfortable with Zatkoff being their backup moving forward. After a rough first start he is 5-0 in his last five outings with only seven goals given up. But there is a big difference between regular season and coming in if MAF flops in the postseason again.

1. Outdoor games: There will be a total of six outdoor games starting with the Winter Classic on Jan 1 with Wing/Leafs at the Big House. Then there will be three the week before the Super Bowl, one in LA and then two in Yankees Stadium. Finally the series will close out the week after the Olympics with Pens/Hawks in Chicago and Sens/Canucks in Vancouver.

2. The Olympics: The break is from Feb 8th- 26th. The groups are already set and yes we will get a USA-Russia matchup.

3. Trade deadline: March 5th. One week after the Olympics. It will heat up pretty quickly.