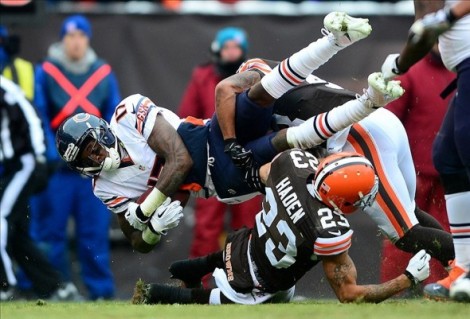 It was not the prettiest victory by this Bears team but it was a win nonetheless. In Cutty’s return, he did not help his own cause early on but anybody who will look at postgame stats will not see that. Two early INTs made me nervous but he responded well and lead the offense smoothly for most of the game.

The Defense came to play for most of the game today, getting several crucial stops against a poor Browns offense. Although they performed well, I still saw many weaknesses going forward. They couldn’t stop many runs and any screen passes. But, with a Lions loss the Bears could potentially squeak into the playoffs and whose ruling out Briggs/Tillman for that? All the offense needs to do is get them into the playoffs and hopefully our defense will continue to get stronger.

The main point of this is to say that the Bears, by some crazy stretch of imagination, have a shot at making the playoffs and there is hope going forward. I look for Jay, along with the defense to improve.

After giving you a prediction of what my social realm was going to look like during the game, I am here to deal the results.

Text from Mack to friends and foes: We’ve got ourselves a game

#Bears back in it with another good offensive drive

And there it is

This collapse by the #Bears does not fall on #Cutler #Penalties

Touchdown #Bears! Who else missed that #Cutler to #Marshall connection? *Raises Hand*

Text from friends and foes to Mack: Damn it Campbell haha

#Cutty the happiest man in Cleveland right now (That's not saying much, tho)

Text from friends and foes to Mack: Wow what a play