Its over. Now what do we do? Actually watch the bowls and settle stuff on the field? That is weird. 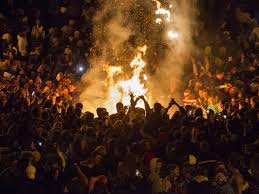 A Nice Evening in East Lansing

After all the debates and chaos the BCS has brought over the years it caught a break this year as the Championship Game is pretty cut and dry. Auburn will play FSU on Jan 6 for the last BCS National Title before we move to a four team playoff next season. Funny part is there would have been controversy this year with deciding who teams 3 and 4 would have been with Bama, MSU, Baylor and Stanford. But seeing as the committee hasn’t decided stated their criteria for how they will decide we will just have to leave it to talk radio and bar talk.

For now lets focus on what happened on Saturday as Auburn ran all over Missouri and the Buckeyes got tripped up by MSU. I must admit I thought Missouri would win the game. I didn’t think Auburn’s run offense could do that to a pretty good defense. 545 yards rushing later and Malzahn has me and all of the SEC believing in his offense. When Auburn won in 2010 they did it with a transcendent QB who went first overall in the NFL. This year he did it with a guy who was a DB at UGA two years ago. Tre Ford did basically whatever  he wanted to the Mizzou defense and they put up 59 points which could have been more had they not turned the ball over. After they won they all put on MSU gear and started to “Sparty On.”

And the South’s prayer was answered in the form of the Spartans taking down OSU. The Buckeye’s secondary had shown cracks earlier in the year against Abbrederis and Wisconsin and Michigan last week and MSU exploited them, jumping out to a 17-0 lead. OSU then came back with Braxton and got the lead but got stuffed on the 4th and 2. Urban made the call himself and was despondent post game. The 24 game win streak was all for naught and it ended up no debate was necessary.

There was also no debate as BAYLOR won the Big 12. God that is fun to type. Oklahoma helped out the Bears and now Briles and boys are headed to the Fiesta Bowl. Lets dive into all the fun stuff…

1. We are playing Kansas State in the Buffalo Wild Wings Bowl… Get Excited: True story, the week of the MSU game I was traveling back from Atlanta and saw some guy in a Buffalo Wild Wings Bowl Shirt. I took it as an omen. That omen has come true. (Btw I hope Hoke can negotiate some deal for Michigan fans. All you can eat for like $15 or something. I trust him to get this done.)

1. Congrats to MSU: I made fun of their offense more than anyone in the early part of the season and you have to give them credit. They settled on a QB, Langford became their back and the O Line became a real good group. O yea, and the defense. Pretty damn good team all around and should be a good matchup versus Stanford. 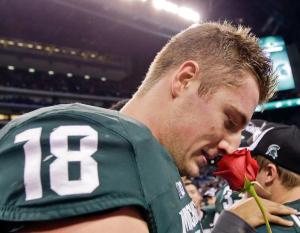 I CANT SMELL ANYTHING

2. “Connor Cook, game manager”… Get used to it: This will follow him for the rest of his career and for the most part it is true. He throws off his back foot a bunch but got the job done. Also the OSU secondary helped him to his best day as a starter.

3. OSU secondary got exposed… I already hit on this but Gardner had 450 yards last week and Cook had 300 plus this week, it was clearly the weak link of the team. Once Christian Bryant got hurt against Wisconsin it was clearly an issue but they didn’t have to worry about it because of the schedule. The Run D held up until the end but the secondary is the reason they won’t be in Pasadena. They probably lucked out because Winston and FSU would have done terrible, unspeakable things to them.

4. MSU D vs OSU O goes to Sparty… It was close: The 4th and 2 call was the play that decide the battle. MSU came out on fire and shut out the Buckeyes in the 1st Q but Braxton and Hyde fought back and got the lead. They were able to put up 200 plus on the MSU D which is legit but it was short of their 350 plus yards they had been averaging coming into the game. Denicos Allen made the play against Braxton that decided the game and gave the round to Narduzzi. (OSU was also 1 for 10 on third down)

5. Langford, WRs and the O line: At the beginning of the year all of these were question marks but in Indy they got the job done. Langford has been a solid replacement for Bell, the WRs did enough to make plays and the O line became a very solid group.

6. Darqueze Dennard would you like to be a Steeler?: I would be very fond of this idea. He is a lockdown corner and is the reason Narduzzi can be so aggressive. Roby came into the season with more hype but I would take Darqueze any day of the week.

7. Some other school please hire Narduzzi: UConn is going to try and interview him but I am not sure he will take the job. He clearly has an influence on the team as Dantonio had him come down earlier to the field than usual. I would prefer if he coached somewhere else but I feel he may get the “head coach in waiting” tag at MSU.

8. Roby is gone, what about Braxton and Shazier?: Sounds like Braxton will be back but Shazier may go to the NFL early. I hope so (That blocked punt by Shazier was pretty awesome. Just flung his body at the blocker.)

9. Joey Bosa is going to be a stud: Would you like to transfer closer to home please? 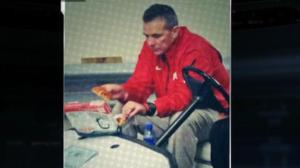 The taste of sadness, Yum

10. Now comes the hard part for MSU, winning the Rose Bowl: MSU hasn’t been to the Rose Bowl since 1988 when they beat USC. That is quite a feat because normally B1G teams lose to the Pac 12. They will be playing Stanford who is a mirror image of themselves with good D and a solid run game. Big thing is Stanford has last years experience. It is tough to stay focused when it is 70 and sunny on Jan 1.

11. Advice to Spartys, go to Pasadena: Trust me. It is glorious and when I went Michigan lost to USC. (Shocker) Another bit of advice, don’t go to the parade because, you know, its a parade. Instead sleep in and go to brunch and watch the Winter Classic.

12. OSU vs Clemson, A shootout: This will be a really fun game. OSU will put up points for sure with Braxton/Hyde and Sammy Watkins and the Clemson WRs will run free for so many points. This will be a big game for Urban. Win and they had a very good year. Lose and they still had a  good year but their biggest win would be over a 9-3 Wisconsin team at home.

13. OSU 24 win streak snapped: MSU was the first top ten team they played under Urban and they were the ones that snapped the streak. People will be down on OSU but their offense is legit but the back half of the defense was their undoing.

14. The Rematch, Nov 8, 2014 in East Lansing: OSU will travel into Spartan Stadium in November. I am sure there will be plenty of hype. (Can you tell I have been living in 2014 for a month? You will love it. There are drones that drop stuff at your doorstep and the World Cup and Olympic Hockey. It is glorious)

1. MSU vs Stanford: Rose Bowl Jan 1: The 100th version of the game will be two sledgehammers beating the crap out of each other.

2. OSU vs Clemson: Orange Bowl Jan 3: So many Points

3. Wisconsin vs South Carolina: Capital One Jan 1: Should be a very good game. Wisconsin’s Run Game vs Clowney should be legit

4. Iowa vs LSU: Outback Jan 1: Normally I would say this would be a rout but with Mettenberger out and a freshman playing, Iowa could because they play solid D.

5. Nebraska vs UGA :Gator Bowl Jan 1: They played last year in the Capital One Bowl. Snooze

6. Michigan vs Kansas State: BWW Bowl Dec 28: I wonder how many flavors they have?

7. Minnesota vs Syracuse: Texas Bowl Dec 27: The Gophers get the shaft and have to deal with bowl politics and are sent back to the Texas Bowl. They could win though which would be nice for them.

1. Auburn vs FSU: The SEC looks for eight straight and FSU tries to complete a perfect season. Don’t forget that FSU DC Jeremy Pruitt was at Bama the past few years and has faced Malzahn before.

2. FSU hasn’t been tested: Their closest game was 48-34 versus BC so it will be interesting to see how they do if they get a test from a very good run game that punches back.

3. Dorial Green-Beckham: After a rough first year he showed up in 2013 and was a force in the SEC title game. He is living up to the hype.

4. BAYLOR!: I would like to thank all of the little people who let Baylor get to this point. Mainly Mack Brown. Either way this is a big moment for Baylor football.

5. Mack Brown Watch is back on: Not sure who Texas will hire with Briles/Malzahn off the board. (SABAN!)

6. Stoops owns Okie State: This one has to sting for the Cowboys who were a double digit favorite at home and had the Big 12 title in their grasp. Instead OU will head to a BCS bowl in a “down” year.

7. Stanford > Pac 12: ASU had a great year but got clobbered by Stanford again. The Cardinal dominated them earlier in the year and the same thing happened again on Saturday. The Pac 12 goes through the Farm.

8. BGSU > Northern Illinois: Jordan Lynch and the Huskies came into the game with everything to play for but their D couldn’t stop BG at all. Instead Bowling Green will be heading back to Detroit to take on Pitt.

11. Sark to USC, Peterson to UW: Sark isn’t a slam dunk hire but he will at least make them good but adding Peterson to the Pac 12 gives them as impressive a group of coaches as anyone else in the country. Good luck trying to make it out of there with less than one loss.

1) Jameis Winston: With his legal troubles behind him this is a forgone conclusion

5) Sugar: Alabama vs Oklahoma: This is going to get ugly

2) Capital One: South Carolina vs Wisconsin