Numbers every Buckeye fan will be talking about one week from today.

Michigan week holds a far greater weight in Columbus and Ann Arbor than any other week out of the year. It’s the week where best friends become great enemies. The week where shit talk comes as a precedent. The week where records and rankings are thrown out of the window as long as your team winds up with one more point on Saturday afternoon.

It’s the only week out of the year that matters for each football team and each fan base.

Not until I stepped on campus my freshman year did I realize the incredible significance of this game, and this rivalry. My brother went to Ohio State, my grandfather played at UM. I thought I understood the hate that runs deep in every fans blood. 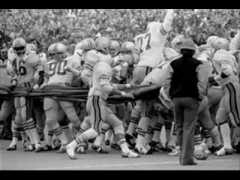 It’s more than that.

This rivalry is so strong that it is sincerely frowned upon to say M******n on campus and you better not be wearing maize or blue around habitually. It’s so strong that each team has a 364-day countdown that starts the Sunday after the previous year’s game ends. It’s a rivalry so strong that fans are willing jump around in a body of water on a below-freezing November night for the cause.

And it’s a rivalry that the Buckeyes have dominated in the last decade. Welcome to Hate Week: The Most Important Week of the Year.

Come Back For More Hate All Week Long at 6 Rings…