I suspect many of you are hungover as well after taking in both top 10 matchups last night. I am sure not matter how much you had to drink you don’t feel as horrible as Oregon does. Stanford dominated from the word go and pummeled the Ducks 26-20. Oregon made it interesting late but were in too much of a whole to pull of the stunner. 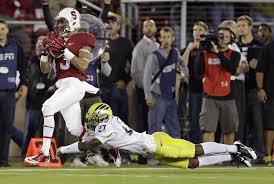 It is smart to catch the ball

I did not see that coming by the way. I am not sure many people did. I thought of Stanford’s win last year as more of how Oregon played poorly than Stanford played well. That was not the case last night and now there will be lots of Nerd Nation> Nike Football columns today. Rightfully so.

On top of that Baylor got a respectable win and did it with defense. They still put up 41 points but that game against OU was not the track meet many expected. The Bears still have a long way to go to be a National Title contender but it is a good start.

Meanwhile those in the state capitals of Florida and Ohio were probably celebrating as they each get to move up a spot and will start wearing “We Want Bama” shirts. For FSU they control their own destiny and do have to go into the Swamp but against an average Florida team. For OSU I saw some twitter worry amongst their fans that Stanford might pass them but I don’t see it. They just need to root for both Michigan schools (gasp) to keep winning prior to their matchups and hope either Bama or FSU drop.

Let us take a deeper look at these games…

Stanford 26 Oregon 20: Here is replay if you want it

1. Power O> Spread: Stanford ran the ball and absurd 66 times. (#66 Mario) They did so for 4.2 yards per carry. Although they couldn’t land the knockout blow it certainly set the tone for the rivalry moving forward. Speaking of…

2. This rivalry has flipped: Two years ago, coming off back to back seasons where Oregon hung 50 plus on them David Shaw admitted the had an “Oregon Problem.” Now after beating the Ducks back to back years on their terms I think Oregon will have to admit the same thing in the offseason. Ever since Pete Carroll left USC, Oregon has been the dominant team in the Pac 12. I think that title belt changed hands last night. It felt like this scene.

3. More David Shaw quotes: After Stanford beat Wisconsin in the Rose Bowl last year David Shaw was asked what their ceiling was and he said “I don’t know.” I thought that was very telling that he knew a win over an 8-5 team was not their pinnacle and that they could still do even greater things. I think you can see Stanford will be a regular contender for the college football playoff moving forward. Now if they could just stop losing to average Pac 12 teams on the road they that would be for sure.

4. How the hell did they lose to Utah?: I knew Jesse Palmer wouldn’t shut up last night about it, they threw the ball and that makes sense. I more just chalk it up to having an off day and not escaping at the end. Remember Stanford was inside the 10 for the go ahead score in that game and came up short. That might cost them a National Title chance.

5. Stanford’s title hopes?: There will be speculation and hypotheticals thrown out but they will need serious help to get in. Had they lost to a ranked Pac 12 opponent then I don’t think it would have been a problem. Then again they have beaten four ranked teams. (Arizona St, UCLA, Oregon St, Oregon.)

6. Its okay Oregon, I have been there: That was very similar to MSU/Michigan. One team just clubbed the other one. The major difference Oregon is good, or at least was thought of before last night. At least you guys have Nike. We just have Adidas. Just drink wine and you just need some music to cry to.

7. Oregon image problem: I was texting with Evan last night and he said Oregon always lose this type of game. I argued that the back to back wins over Andrew Luck Stanford teams in 2010 and 2011 disproved that but there is no doubting that Oregon might have the same issue OSU had after back to back title defeats in 2006 and 2007. Instead of they can’t keep up with the speed it is the opposite, they can’t beat teams with superior talent in the trenches. I think it is more of a grey area but it is clearly something that needs to be addressed in Eugene.

8. Its okay to kick field goals Oregon: Oregon got inside the 10 multiple times early in the game last night and came away with nothing. I understand their mantra is to go for it there but in close ball games you need all the points you can get. Just 2 field goals and we might have a different story.

9. Mariota’s Heisman hopes look dim: He had a chance to move up to number one and now I am not sure he can recover. Beating Oregon State would be nice but not sure how many people will watch that game now. It looks like Winston is the leader and Manziel has a shot and McCarron will have chance as well.

10. Obligatory Josh Huff gif: I assume Oregon’s rivals will have fun with that one, as they should.

11. Potential Rose Bowl Matchups: OSU vs Stanford and MSU vs Stanford. One would be another battle of contrasting styles while the other one would remind everyone of football when the game just started in the late 1800s. Either way it won’t involve Michigan. I need more wine and Zac Brown Band and crying.

The conductor of the Baylor train

1. Baylor won with defense: They stuffed OU early in the game inside the red zone and that was the difference. If the Bears can play some solid defense then they may actually have a chance of going unbeaten.

2. That is not a good OU team: At least by Oklahoma standards. I don’t think anyone is blown away with their talent and Blake Bell is not good. Not to say Baylor isn’t good but I am not sure if they are a National title contender. This win didn’t convince me and trust me, I want them to be.

3. Now the hard part comes for Baylor: Here is their schedule

Nov 16th vs Texas Tech in Jerry World. (No idea why this is in Arlington. (O yea, money))

Nov 23rd at Okie St: This is the game I want to see. If they can win here then yes they are legit

Nov 30th at TCU: Not a vintage TCU team but their D is still legit

Dec 7th vs Texas: Lots of story lines in this one.

I hope you had fun last night and have a great weekend. I am heading up to Ann Arbor this afternoon so that I can yell at my team in person. Should be fun.