For the pending Miami/FSu game I figured I would repost the RFF for the 2002 version of this game. It is exciting that this game finally means something on a national stage again. While the U isn’t all the way back and may not win on Saturday, with their sanctions behind them I expect Al Golden to get them back there soon. They might have to wait for Jameis Winston to head off to the NFL though before they beat FSU again though. 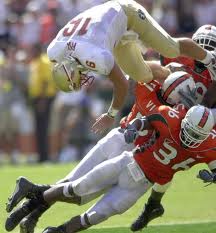 The Situation: The absurdly stacked 2001 Miami team won the National Title and entered this game riding a 27 game win streak. They were 5-0 and ranked #1 and had been wrecking people including beating Florida 41-16 in the Swamp. FSU was ranked #9 and had lost two weeks prior at Louisville.

The Players: My God there are some doozies. Lets go through this by team

FSU: QB Chris Rix (I may or may not have written this whole thing because of him.), RB Greg Jones (Beast!), WRs Anquan Boldin and P.K. Sam, DT Darnell Dockett, K Xavier Betia (Only pawn in game of life)

Where was I: It is sad that I can remember this whole day but can’t remember last Tuesday. I was a junior in Highschool and I played golf in the morning. (No idea what I shot) This game was at Noon which is rare for big games nowadays but I like that. Later on that day I went to homecoming but spent most of the dinner watching Michigan beat PSU in overtime and OU beat Texas once again. (Fire Mack Brown!)

Notes from the game: This video is skewed towards Miami and doesn’t show FSU highlights. I can assure you Greg Jones was in a beastly mode that day.  (Here is the full broadcast if you also have the sickness)

3:40: At the start of the 2nd Q Ethnic Sands makes a play. I only bring this up because his name is awesome and I somehow for him.

6:15: Andre Johnson sighting. So terrifying how much talent was on this field

6:43: TD pass to Kevin Beard. Highlights of this include his dance afterwards and Nessler saying “theres a duck in his beard” for some reason. 27-21 FSU 4th Q

8:00: McGahee screen pass. Is there anything sexier than a well executed screen pass? I don’t think so

10:30: A montage of all of the missed kicks by FSU in the rivalry. Must be horrifying.

12:22: Tears of sadness. Life as an FSU kicker not named Janikowski I guess

12:55: Interview with Larry Coker and he also has no idea what is going on

Fallout from the game: Miami would roll through the rest of the regular season undefeated including a huge win in Knoxville over #2 Tennessee. They would eventually lose to the Dark Side in a classic National Title game in Fiesta Bowl.

FSU would go onto lose to Notre Dame two weeks later at home. (Ty Willingham was undefeated, 2002 was a weird year.) They would lose 2 more times on their way to going 9-5 as they continued to wander the desert post Chris Weinke. (They are just now coming out of that desert. I miss the dominant Noles of the 90s.)