With the buffet of sports entertainment available every autumn, baseball has to work hard to earn the attention of the average sports fan. At this point each year, one is still likely clinging to hope that the college football or NFL team you follow can get it together for a big run. Perhaps this is the year that your favorite NHL or NBA team finally puts it all together. College basketball junkies are attending Midnight Madness.

As it turned out, even baseball’s chaotic short postseason could not prevent the best team in each league – the Cardinals and Red Sox – from advancing to the fall classic. (But, of course, you knew this because you read last week’s LCS preview)

On the surface, this year’s matchup may appear ho-hum, but what the 2013 Fall Classic lacks in flash it makes up for in substance. Let’s break it down:

OFFENSE: Boston’s offensive firepower carried the team through rough patches during the regular season, and it has been more of the same in the postseason. When David Ortiz launched a game-tying grand slam in the 8th inning of Game 2 against the Tigers, he added to a postseason legacy that could make him the first traditional DH inducted into the Hall of Fame. The Red Sox won that game 6-5, evened the series 1-1, and stole the momentum of the series.

Boston first baseman Mike Napoli launched a pair of clutch home runs against the Tigers in the ALCS, and he hit .350 with two homers in the 2011 World Series as a member of the Texas Rangers against these same Cardinals. Veteran Shane Victorino shrugged off a cold postseason at the plate to launch a go-ahead grand slam in Game 6 that brought bedlam to Fenway. Leadoff man Jacoby Ellsbury has been red hot, hitting .400 with 10 runs scored and six stolen bases this postseason.

The Cardinals will get a shot in the arm for their lineup with the return of first baseman Allen Craig from injury after six weeks on the DL. With the DH rule in play for the first two games in Boston, Craig will have an opportunity to boost an offense that has been bailed out by dominant Cardinals pitching so far this October.

STARTING PITCHING: Led by veteran Adam Wainwright and rookie Michael Wacha, the Cardinals rotation has been stellar in October, helping their team win three games when it failed to score more than three runs. Young right-handers Lance Lynn and Joe Kelly have also each recorded wins this postseason and have helped keep the young power arms in the bullpen fresh.

Ace John Lester has been solid, but fellow starters Clay Buchholz and Jake Peavy have been shakey at times for the Red Sox. Veteran John Lester is past his prime, but used smoke and mirrors to get a big win against Justin Verlander in Game 3 of the ALCS for the Red Sox. In general, you get the feeling that Boston is holding its breath every time they see anyone other than Lester starting a game.

BULLPEN: The late innings have been a strength for both teams so far, which is usually the case if you are winning in the postseason. Boston closer Koji Uehara was named the MVP of the ALCS after he recorded three saves, including two that required more than the requisite three outs. 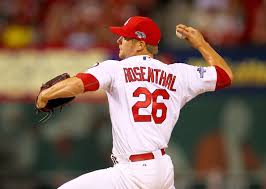 Trevor Rosenthal has been fun to watch in the ninth inning for the Cardinals. His 100+ MPH fastball has been mostly untouchable, but his willingness to dare hitters to hit it by throwing right down the middle of the zone has been just as intimidating. Fellow youngster Carlos Martinez has come through when asked to get big outs in the 8th inning, and veteran Randy Choate has been filthy against left-handed hitters.

This series will likely be won and lost with pitchers other than the starters and closers on the mound. Boston has pieced together a bridge to Uehara with right-hander Junichi Tazawa and lefty journeyman Craig Breslow in the highest leverage spots. Both men have been brilliant over the last few weeks, but both the Rays and Tigers had been slumping.

BENCH: Daniel Nava has been the left-handed half of a platoon with Johnny Gomes, who has been able to mash left-handed pitching and bring flair off the bench for Boston. Quinton Berry has reminded Boston fans of the 2004 version of Dave Roberts by coming off the bench to steal bases. Veteran catcher David Ross has played more than a typical backup catcher, hitting over .300 this October while growing the ugliest of Boston’s many ugly beards.

Diminutive outfielder Shane Robinson has been the only member of the Cardinals’ bench to put up more than a whimper. Manager Mike Matheny has seemed reluctant to use either infielder Kolten Wong or outfielder Adron Chambers – with good reason. It will be interesting to see how Matheny uses Allen Craig and thunderstick Matt Adams – who has filled in well since Craig has been on the DL – when the series shifts back to St. Louis this weekend.

Look for St. Louis’ postseason experience and willingness to work the count to chase Boston’s starters at times in this series, bringing the potential to expose middle relievers. If the likes of Tazawa and Breslow are able to answer the bell, look for Boston to have the edge in the series. If not, things could quickly spiral for the Red Sox.