The crowd erupted as T.J Ward stepped in front of a pass from Jeff Tuel and ran it back to seal a victory for the Browns last week. First place in the division in the month of October, ya I said it. Now we will take a short Tarantino back to three weeks ago.

Trent Richardson gets traded there were probably a lot of people who looked to the schedule and grumbled. Most thought Browns vs. Jaguars in December would be the battle for top pick in the 2014 NFL draft. There is no guarantee that won’t happen but what a difference three weeks make. Weeden goes down and Hoyer steps in to engineer a game winning drive against the Vikings on a last minute TD pass to Jordan Cameron. A game where the Browns gave up only 88 yards to Adrian Peterson on 25 carries…. His longest run of the game being only 9 yards. If you watch enough football you know that does not happen often. Wow, Brian Hoyer a Cleveland guy gets to play quarteback for his hometown team. You know at some point we have all dreamt that growing up. This guy is living it!! 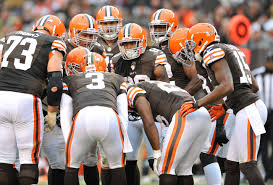 So the Browns dispose of a Bengals team that a lot of people have in the playoffs and maybe even winning the division (I still think Bengals win the division).

But as they say on any given Sunday, this particular Sunday they pulled it out. They out gained the Bengals and did not turn the ball over. All of the sudden you have people looking at each other, are the Browns for real?

Then you hit a Thursday night game against the Bills, two fan bases that have had more than their share of NFL heartbreak. Let me tell you if you are looking for some people that know how to tailgate you would have felt like you were at a playoff game. A comfortable 78 degree day at the beginning of October? Ok, I will take it .

After negotiating with one of the many scalpers I walk into the stadium and gather my $10 beer. The place was on fire and what a great atmosphere, one that hasn’t graced the shores of Lake Erie in quite awhile.

Then something bad happens, Brian Hoyer hoes down while I’m buying my Rocky Mountain goodness in a cup and then we are back to Brandon Weeden (cross your fingers everyone). The Browns pulled this one out and now we can begin to look at week 6. It was however nice to see one of the biggest pieces missing from the first couple games had an impact for the third straight game in Josh Gordon. In three games he has caught 18 passes for 303 yards and a couple of trips into the end zone.

Five games in definitely isn’t locking up any playoff positions but it is a good start. The schedule gets much tougher over the coming weeks. Matt Stafford, Aaron Rodgers and Tom Brady are just a couple of the guys that the defense will have to face. The defense that is fourth in total defense and in the top ten in both rushing and passing.

Worrying about a quarterback controversy is unnecessary since Hoyer is lost for the season so the Brownies are left with who they came to the dance with this year. Limit turnovers and get to the ball to your playmaker(s). Rely on the defense to do what they have been doing thus far.

Mingo is emerging as a potential star on the team and continues to make plays.  Focus this week on stopping Calvin if he plays which he has practiced this week so it appears he will though he is officially a game time decision. This will be the best offense the Browns have faced all season and a lot will be learned about the defense and Brandon Weeden at QB.