Maybe if I don’t talk about upsets then some will happen. So this week nothing will happen and we will all be bored and all of the higher ranked teams will win and that will be that. (I hope this works.)

There are only three matchups between ranked teams (Oregon at Washington, Florida at LSU and Mizzou at UGA) so this weekend feels a little light. Add that to the fact that OU/Texas feels more like a funeral for Mack Brown and that is why the games this weekend don’t have much spark. Still, all it takes is one domino and things will start happening.

730 pm Rutgers at Louisville ESPN: Rutgers has had some crazy games so far this season and while they may not get the upset train going, they should be able to give Louisville an actual game. (Come on Rutgers, do the B1G proud and get this party started right. (Which probably means you will lose by 40.))

8pm Tigers at Oakland TBS: Whoever wins I hope they beat the Red Sox

830 Giants at Bears NFLN: I hope no employer in the city of Chicago expects their employees to get any work done on Friday. A Thursday night Bears game means some late Thursday night drinking all over the city, regardless of the outcome.

930 Arizona at USC FS1: I was sad that Kiffin was gone but then I remembered that Ed Orgeron will be making his coaching debut. I know he is from the south and all but I will be the first one to support him being hired at Minnesota. He would fit right in up north.

630 Jamaica at USMNT ESPN: I know USMNT already clinched and all but it is still a good enough reason to drink and yell at the TV. Plus you need to prepare yourself for the World Cup next year if you don’t normally follow US soccer.

9am College Gameday From Seattle: If there isn’t an entire pack of Huskies on stage with Corso and Herbstreit at some point I am going to be pissed. 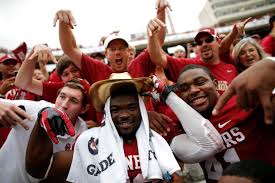 Upside Down Horns is Fun to do

Noon Oklahoma vs Texas ABC: They are splitting up Musburger and Herbie this week so Brent can call this game. I assume he wanted to hit on all the attractive women that will be in attendance. Not a bad plan really. (Herbie will do A&M/Ole Miss with Nessler.)

Flip the remote: Missouri at UGA ESPN: This game involves UGA so there is a good chance it will be entertaining. One the Red River Rivalry is out of hand just tune in here and something crazy will happen.

Wait this game matters?: Pitt at Va Tech ESPNU: These two used to be Big East rivals and face off again but now with both in the ACC. Pitt actually upset the Hokies last year so Va Tech will try to get them back here.

Wait this game matters too?: Indiana at Sparty ESPN2: These two meet in a somewhat meaningful non basketball game. Sums up the B1G pretty well

Kingsbury Watch: ISU at Texas Tech FS1: Looks like Baker Mayfield may miss this game with a knee injury. Maybe Kliff should just get in there and sling it around himself

330pm Florida at LSU CBS: Dating back to last year the Gators defense has not given up over 20 points in any SEC game. That stat will get put to the test by Mettenberger and the Tigers. If LSU wins the turnover battle they should win the game but Florida’s offense has found some spark since Driskel went out with any injury. The best part of this game may be Muschamp vs Miles: which one will be crazier?

Flip the channel: Northwestern at Wisconsin ABC: Big game for each team coming off losses to OSU. For Wisconsin winning out is their only hope at a BCS at large. For the Cats an 0-2 start in the conference is a tough spot to be in.

Baylor Watch: Baylor at Kansas St FOX: You should be watching this because you might see a football field actually catch on fire because of too much offense. Call the 911 if this happens. 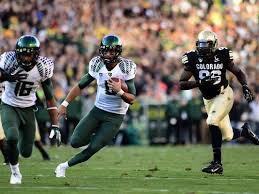 4pm Oregon at Washington FS1: Not sure what anyone was thinking putting this game on FS1 but then I remembered the ALCS. If you didn’t already hate the Red Sox enough, just add this to the list. If you don’t have FS1 go to your local bar or Best Buy and watch.

8pm Oakland/Detroit at Red Sox FOX: This is the last postseason we will have to listen to Tim McCarver. Makes me feel like popping champagne.

Flip the Channel: A&M at Ole Miss ESPN: A&M won here last year and has to come to Oxford again for some reason. If they win hopefully we get excited Kevin Sumlin again.

1pm Steelers at Jets CBS: I will be driving back from PSU thank God 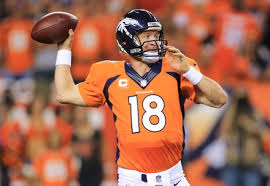 4pm Saints at Pats FOX: Make sure to keep an eye on the Broncos/Jags score

8pm Washington DC vs Tony Romos NBC: No one cares

8pm NLCS Dodgers at Cardinals TBS: What is baseball?