Lebron on the sidelines

Boom, Buckeyes got the almighty “W” at home, under the lights against the dreaded Badgers and man was it pretty. For anyone that read last week’s installment on the “Top 10 Reasons I Dislike the Badgers”, you know how important it was to my rooting interests and bragging rights amongst friends.

As this week continues to roll and last week’s win began to settle, so did writer’s block on how to become more original in the ability to hate.

How to create something that raises the blood pressure & makes it boil in anticipation of another marquee game?

Q: Write another article similar to the one last week on the personal reasons why I dislike the Wildcats based off of my friends that went there?

A: Don’t have any friends that went to Northwestern, none of us were ever smart enough to sniff the application

Q: Write an emotionally charged petition making fun of their coach for being awful…or fat… or both? (See Bret Bielema & Brady Hoke)

A: Can’t do that either. Pat Fitzgerald is the most well respected coach in the Big 10 and on that same short list for all coaches in college football. He leads a program with tremendous leadership, recruits quality talent with challenges in admissions, has brought the program up from nothing when he started, and now they are a national contender with a night game that has more hype than any Wildcat fan can remember in recent memory.

Q: Last case scenario, go to Google and search anything along the lines of Northwestern Jokes just to make any NU readers insecure?

A: Also not possible. Not only are there no jokes or funny pictures of the Wildcats on the internet, I’m afraid the only results that came up are either beyond my intellectual capabilities and/or they are just awful jokes. Both are possible. Don’t believe me, go through this site and just try laughing. Bet you can’t do it…can’t do it (homage to Mike Singletary)

So how does one really put something out that stirs the pot prior to a huge game? You don’t. You give Northwestern the respect that they are due for the position they are currently in and you dig deep, real deep in your plums and muster up the excitement to watch the Buckeyes take the field once more this weekend.

So without further ado, here’s the top five keys to the game on Saturday night in Evanston:

Veneric Mark will be a lot to handle

For anyone that doesn’t know this guy, do us all a favor, watch this highlight tape and get yourself educated. Why? Well first, the Buckeyes didn’t play the Wildcats last year and second, Mark has only touched the ball 12 times this year in the season opener prior to getting injured.

Mark was Herbie’s preseason winner of the “Breakout Player of the Year” Herbie award. Why, well Mark has explosion with the ball and a lateral ability to make any defender miss. Last year he accounted for 13 TDs, amassed over 1460 total yards and over 6 yards per carry.

Why should Buckeye fans be concerned about Mark when our defense held Wisconsin’s triple headed monster to 100 yards last week on the ground? Wisconsin couldn’t spread us out and also couldn’t run the option. Buckeye fans need to focus early on whether the option is stopped or not.

To a similar point on Mark (above), this is going to be another key test for the Bucks young defensive line. For the last three weeks, it has been noted here in this blog that the defensive line has exceeded expectations each week. Trusting the youth to come into their own shell and they have. Last week’s performance was incredible impressive as noted. However, last week’s gameplan was to stack the box full of linebacker & safety help and make the UW QB beat us in the air. This means excessive run support which helped the d line shine brighter.

This week won’t be the case. With NU focusing more on a pure spread with (read) option capabilities, there will be less immediate run support and the young buckeye line will asked be superstars. Look to see if Bennett can amass double & triple teams at the point of attack and also key in on whether Spence/Washington/Bosa can understand their contain and option keys. 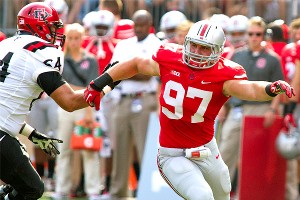 Joey Bosa has been a pleasant surprise as a true freshman

Last week Hall had one attempt on the ground…ONE ATTEMPT. Now that to me seems like one of two things: Either Tom Herman forgot that Hall got a medical red shirt and was still hanging around OR J. Hall got in the dog house. Let’s not believe the latter. Meyer said in his post-game presser that he couldn’t believe Hall was in the game for only one play and that would be evaluated very closely during the week.

Squeaky wheel almost always gets the grease…Look for Hall to get at least 12x the carries he got last week against Northwestern. Bet the house.

To a very similar point as the one made above, it seems that Herman puts himself in a shell against Wisconsin. Two years in a row now we’ve seen a suspect conservative playing calling menu against the Badgers. Last year it was too much passing and not enough Hyde. This year it was not enough Jordan Hall and way too much predictability of quick snap Hyde & Braxton runs up the middle.

Now I’m a huge Hyde supporter as many know so I don’t mind the Hyde carries. However the lack of the Buckeyes 2013 leading rusher last week in Wisconsin took away a key element of our offense last week…the ability to spread the field out against a slower defense. If Urban’s presser was any clue about our offense this week, expect more Hall and less predictability in the play calling.

This was a tough pill to swallow for Urban, for the defense, for the whole team and for the Buckeye fan community. Christian Bryant brought an unbelievable asset to the table that goes very under appreciated to those lacking insight into the locker room which is leadership. Meyer nearly shed a tear after he found out news about Bryant’s ankle being broken which shows you how much he meant to this team.

Looking forward not only to this game but to the rest of the season, there is going to be a strong need for someone to step up. But looking directly at this game, the biggest concern or point to pay attention to is how is our secondary going to fill this huge hole against an offense that likes to spread it out and take advantage of holes in the secondary?