The MLB regular season is in the books, and tonight begins the most intense part of the season: October. For Reds fans, tonight is the biggest game of the year. Put all else aside and get to the nearest bar because one way or another, you’re drinking tonight.

The Reds were a favorite to start the year but thanks to injuries, questionable managing and essentially s******g their pants, they finished 90-72… good enough for the last Wild Card spot. With the new MLB playoff layout, this wildcard game represents a “win-and-your-in” scenario against the hated division rival: The Shittsburgh Pirates.

The Pirates come into the game as a vegas favorite having won the season series 11-8 against the Reds… Big deal. This is the only game that matters.

The Pirates are throwing left-hander Fransico Liriano, whose reemergence this season has been a huge contributor to Shittsburgh’s success. His stats on the season are impressive with a 16-8 record and a 3.02 ERA. A closer look shows he has dominated left-handed hitters, giving up only a .131 average. Woop-Dee-Frickin’-Do, the Reds are 3-0 against him this year.

Hypothetically, Liriano could spell trouble for the Cincinnati Reds since three of their top four hitters are left handed; Joey Votto, Jay Bruce, and Shin-Shoo Choo have combined for the majority of the Reds’ offense throughout the season. Of those three, Joey Votto has the best batting average against lefties at a mediocre .251, but ask me about averages when Bruce sends one 350 feet straight over the right-field wall… I’ll give you the one finger salute and have the last laugh.

In terms of pitching, the Reds are throwing Johnny Cueto tonight. It’s a ballsy move by Dusty Baker, but it’ll pay off when Cueto makes Shittsburgh’s lineup look like high school softball players. When Cueto was healthy this year, he pitched like a beast with record of 5-2 and a 2.82 ERA. Over his career, he is 65-43 with only a 3.53 ERA. Maybe most importantly, though, he has looked strong in his two starts since returning from the DL going 2-0. Basically, if Cueto pitches the way everyone knows he can, the Reds should win. If he does not pitch well, the ‘natti fans, including myself, will call for Baker’s head. Personally, I would’ve pitched Homer Bailey, but what do I know…

The X-Factor this game is without-a-doubt Billy Hamilton. Billy the Kid is a type of talent that comes around once a decade. His speed makes a cheetah look like a grandma with a walker. He’s driving a Ferrari and everyone else is driving a minivan. The kid can fly. He’s 13/14 on stolen base attempts since being called up in September, including 2 in one game against the Pirates on September 22 that made both of the Pirates catchers look like pu****s. Look for Dusty to get him on base in a critical situation and watch him spin. 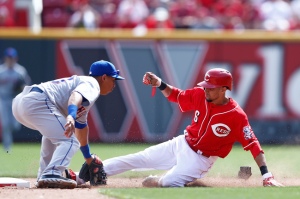 I’m not buying into the “added advantage” the Pirates are going to have with it being their first playoff game in decades. I take the reds 5-3 in a close game that breaks the heart of all the Pirates “fans.” Cheer up though Shittburgh, maybe we’ll see you again in 2033. At least you have the Steelers. Oh wait…

One response to “Your Brutally Honest Reds Playoff Preview: The Wildcard”