When the NFL schedule came out last April I circled this past weekend because the Bears were coming to town for Sunday Night Football. I figured a bunch of people from Chicago that I knew would want to come visit and take in a game here in the Burgh. Little did I know at the time but the real game people would want to check out would be at PNC Park and not Heinz Field.

Since I have moved back to Pittsburgh at the beginning of the year the Pirates and Steelers have switched places and everything I knew about Pittsburgh sports growing up has flipped upside down. It is like one of those crappy movies where people switch bodies that we all hate on yet we still watch them anyway. I am pretty sure there is one with Lindsay Lohan but since its not The Parent Trap then its not worth talking about. (Don’t worry I will have my 15 year anniversary retrospective piece on The Parent Trap soon. Just hang in there.)

Bizarro Pittsburgh would be the name of this movie and we fully experienced it this weekend. Even Pitt football was actually entertaining which has never been the case unless Larry Fitzgerald was on the team. Lets dive in…

When my buddies planned this trip a few months ago we threw in going to a Pirates game as an extra and it turned out to be the Pascal Dupis of the weekend. (I had to get the Penguins in here somewhere.) Friday’s game was the opening of a huge series with the Reds who were only a game behind the Pirates in the standings.

The Pirates have been a surprise all season long behind their mashed up rotation, Sharknado bullpen and Andrew McCutchen. I, like many others, had ignored the Pirates solid start partially because of the Pens playoff run but mainly because they had started so well the two previous seasons and collapsed in August and September.

It wasn’t until the Gerrit Cole game on June 11th that I started to realize that something special might be happening at PNC Park. My buddies and I went to the game to see Cole pitch and what I didn’t expect was the place to be an absolute zoo. I had never seen PNC Park like I had before that night. It was sold out and the place was on its feet from beginning to end. (We actually missed the beginning because we couldn’t find parking, a problem that never normally happened for Pirates games.)

The atmosphere was very similar on Friday as the stadium was sold out and everyone wanted to soak in meaningful September baseball. Through eight innings the Pirates played magnificent baseball and led the Reds 5-2. Closer Mark Melancon had allowed 2 baserunners but the Pirates were still only one out away from winning when shortstop Jordy Mercer threw the ball away and kept the Reds in the inning. From there they tied the game up at 5-5 and eventually won 6-5 in extras off of Joey Votto’s solo home run.

As much as the loss stung and hurt the Pirates chances to win the NL Central it felt fantastic to care about baseball this time of year. As much as losing sucks I had become so numb to the Pirates losing it was good to feel something for the first time in a long time, even if that feeling was disappointment.

The Pirates were able to rebound last night and clinched their first playoff birth in over 20 years. Listening to talk radio around here I heard so much emotion and joy from longtime Pirates fans who have been waiting for moments like this. It is a far cry from the days when I grew up around here and you could go to games for $10 and anything Pirates related on sports talk radio was only to bring up their ineptitude.

I salute this Pirates team for changing that losing culture and to all my buddies who have lived and mainly died with the Buccos through the years. Hopefully we can get one playoff game at PNC to create some memories.

We didn’t go to PNC on Saturday night and instead watched college football all day. Nothing really to see here other than an entertaining Pitt football game with Duke. This must really be Bizarro Pittsburgh if both Pitt and Duke played an interesting game of football.

Now for the flip side of Bizarro Pittsburgh. Normally a fall Sunday in the Burgh is a religious day with everyone in the city planning their day around watch the Steelers game. When my buddies made plans for this trip we hoped to see a battle between two playoff teams. We did watch this when we watched the Pirates play the Reds that afternoon on TV but certainly not that night at Heinz Field.

The last Steelers game I had been to at Heinz was in 2004 when the Roethlisberger was a rookie and the Steelers beat the Ravens to go to 14-1. Nearly a decade later I returned to see quite the opposite. The Steelers entered the game 0-2 and seemed to be broken ever since Roethlisberger got hurt in the middle of last season.

The tailgating and crowd still showed up as if it were a big game but there was so little buzz in the air it felt like a preseason game. The crowd piled in just before kickoff and tried to get themselves fired up with “Here we go Steelers chants.”

The enthusiasm evaporated as the Steelers fell behind 17-0 almost instantly and that cloud of sports apathy that had applied to the Pirates for so many years had moved its way over Heinz Field. Even the Bears fans that were with me and the many in our section sat and joked at our team with us. (All of the Todd Haley Jokes.)

Even as the Steelers mounted a comeback behind Antonio Brown it never really felt as if something special was about to happen. So when Cutler hit Earl Bennett in the corner for the dagger it just confirmed what we all knew; the Steelers are the worst team in Pittsburgh. (Btw I have seen a lot of Jay Cutler after living in Chicago for five years and I never remember him playing that well. He and Trestman might work out just fine for the Bears.) 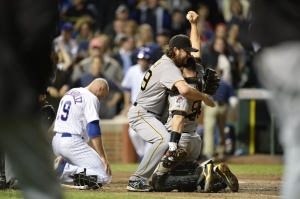 No one really knows what to expect from here on out for both the Steelers and Buccos. For the Steelers is actually quite simple, they are just a bad team with serious question marks on both lines and leadership from the coach on what to do with the offensive coordinator. We will all just have to watch them limp along like a zombie.

For the Pirates it is a lot less concrete on what might happen. They could make some deep October magical run or this could all be over next Tuesday and all of Pittsburgh has to pay attention to hockey pre Halloween. For all the changes that have happened to the Pittsburgh in the past year there is one constant; we will still all worry about Crosby’s health.