We are becoming less and less random with these as we get deeper into the season as I decided to recap the 1997 Tennessee/Florida game as these two rivals play this week in the Swamp. While this week’s version will not feature two top five teams or Peyton Manning it is always fun when these two get together. I feel like the rivalry misses Spurrier and his constant shots at the Vols and Fulmer. Let us get on with the show… 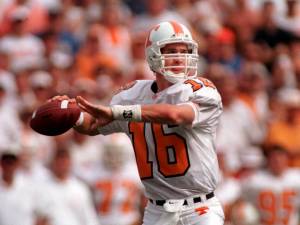 Announcers: Sean McDonough and Craig Blerjack (No idea who the 2nd guy is but McDonough is glorious. Michigan gets him this week, probably the most exciting part of the game.)

The Situation: Peyton had surprisingly returned for his Senior year in Knoxville despite the fact he would have been a top pick in the NFL draft. He had not beaten Florida in his previous three tries and one of his goals coming back was to take down the Gators in the Swamp. Florida was coming off an National Title the previous year and had to replace Heisman winner Danny Wuerffel. The QB who got to replace him was Doug Johnson and it was his job to deal with Spurrier’s quick hook. (They would all reunite in DC in the NFL in a few years, so cute.)

Where was I: After watching Michigan trample Baylor (sorry Baylor) I settled in on the couch and watched these two heavyweights do battle.

:10: A full length CBS intro with storylines and everything.

1:27: Vols entrance. First and last time we hear Rocky Top. Such a shame.

4:38: IMPORTANT: The Gators had a defensive player with the last name Xyndis

10:00: Another Peyton int. This is not what he planned

10:45: Manning fumble. At this point he wants to be anywhere else but in the Swamp

12:25: Scoreboard point by Johnson. How very Manziel of him.

14:00: Gators get another TD to make it 33-14 but I am not sure he caught it. No replay back then so no chance for the Vols to make a comeback

17:50: Spurrier interview is a glorious as you would think it would be

Fallout from the game: The Gators would rise to #1 in the polls but drop just a few weeks later with losses to LSU and Georgia. They would go on to beat Penn State in the Citrus Bowl. Tennessee would go unbeaten the rest of the way in the regular season before losing to Nebraska in Orange Bowl. This did not help Michigan win the National title outright which sucked. Come on Vols.