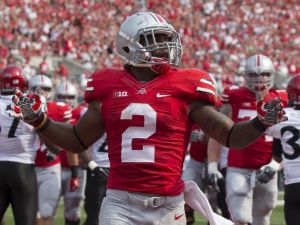 All is normal again Buckeye nation. No worries, no need to panic, the team ended any concern about their ability to lay the smacking. Remember when the Bucks won a non-conference game under Meyer that you really felt like they really put away their opponent? This was the first time I saw it.

All four games last year were suspect at times. Last week certainly had moments worth cringing. Not this Saturday. Well of course minus the knee injury for Braxton Miller, try not to focus on that.

Last week I debuted a few toasts toting them as things to drink on. Last week there was also a few intended low blows, describing them as “sober the F@#K up”. After watching week two, this gets much prettier:

Braxton Miller’s Ability To Stay On The Field – Certain players it’s possible to put below the program and still get the same if not better production, like losing Denard Robinson for Devin Gardner. Braxton Miller is not that someone who can be viewed as replaceable. OSU fans were all too comfortable without Braxton this weekend. Braxton can’t have an injury prone season for OSU to be National Championship contenders.

Bri’onte Dunn – Feel bad for Bri’onte as he hasn’t gotten any love on the field in the last two weeks compared to his counterparts. It’s hard to judge a guy who hasn’t had his shot yet but he clearly isn’t doing anything to show Urban what he’s capable of unless Urban has him unfairly stashed in the dog house.

Going, going, back, back to Cali, Cali: A future concern of mine this week is going to California for a tough environment game. Sure California isn’t much good but I have nightmares of Ohio State in California and what that distraction could do to us. Omit this concern if the Bucks come out hot.

Toast Your Glass and Soak It In

Kenny Guitton – Kind of hypocritical to cheers to Guitton by really coming down on the Braxton injury right? KGIII is one of the best backups that you can ask for. He’s stepped up to the plate every time his number has been called. The best performance of the Saturday needs to be enjoyed.

Defense’s Intensity & Speed – I hated on these guys last week because of not hitting at the point of attack. Boy they must have gotten a message because these boys were stars on Saturday. Their speed & pursuit was electrifying. Michael Bennett got fans excited about his ability clogging up the middle, Shazier tackled everything. The secondary looked virtually impossible to throw on. Doran Grant stepped up as did Noah Spence.

Philly Brown – Philly is my favorite receiver and i’m not even going to pretend like he’s not. Philly got in the end zone twice and each TD was picture perfcet. He did it as a deep ball threat and also playing his possession receiver role. Urban even suggested in his press conference today that Philly will be an NFL receiver. Fans of Corey “Philly” Brown should hope he can sustain some tremendous momentum.

Dontre Wilson – It was predicted on this blog that Philly would get in the end zone for the first time on Saturday and he did…quickly. Dontre eliminated concerns of fumble-itis, demonstrated electrifying speed and ability to get everyone to love him. Dontre will be another huge “X Factor” against Cal.

Michael Bennett – Get’s his own little blurb because he was the most enjoyable part about the defense on Saturday. Most enjoyable in the sense that he helps give confidence in a once low-confidence DT unit. As fans we can brief a bit easier to know we have a beast up front and someone who can make plays (see sack, forced fumble & fumble recovery).

Next week at Cal, it’s fair to assume that Buckeyes should be on upset potential. Traveling across three time zones, going to a beautiful campus and playing a BCS conference team that has under performed to this point this season could mean that Cal has what they want for an upset. That or they’ll get steamrolled. Most likely it’ll be the latter but it’s up to the Bucks to not leave it to chance.