This will be brief since I have just returned from Ann Arbor and I am actually hungover. I will have more on my trip Tuesday but the obvious story coming out of the game was the new 98 Devin Gardner. He was spectacular and had one of the most egregious turnovers I have ever seen but was able to recover for the win. Michigan is 2-0, thats what I care about most but is great to see he is living up to the offseason hype.

Lets take a look at some of the other story lines from around the country. 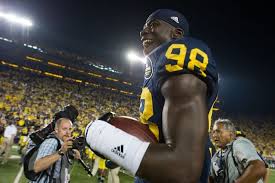 1. Illinois- I had only been at the tailgate for a few hours but when I looked up and saw Illinois dominating Cincy I thought I had way more to drink than I actually had. I actually asked 3 to 4 people to confirm to me that they were in fact up double digit points. Clearly I underestimated Beckman and forgot they have a senior QB. We find out how good they are this week with a matchup versus Washington but still, a good win for a team coming off an awful year.

2. Sparty- I only saw parts of the game but sounds like the same story as last week. Great defense and horrendous offense. They have one more tune up game before the head to South Bend next week.

3. OSU- Braxton had a scare but should be good. Kenny G led the charge anyway and showed the value of a quality veteran backup. (I stress quality there since MSU has a veteran backup too.)

4. Wisconsin- Still has yet to give up a point under Gary Anderson. They get a serious test out in the desert against ASU this coming Saturday.

5. PSU- I saw only highlights but man Hackenberg is an actual QB prospect. PSU hasn’t had one since Kerry Collins. (Morelli doesn’t count as a legit prospect.)

6. Iowa- Got a win over Missouri State which is nice. Iowa St this week.

7. Northwestern– Colter returned to the lineup and he and Trevor Siemian combined to form some type of super smart QB robot as the Wildcats trounced Syracuse. The Cats now have 2 more tune up games and a bye before hosting OSU and playing in Madison. Huge 2 weeks in the B1G.

8. Purdue– I saw they returned the opening kickoff for a TD then struggled the rest of the way out. But hey at least Indiana lost right?

9. Nebraska- Their defense wasn’t horrible which is nice. They host UCLA this weekend in one of many feature matchups between B1G and the Pac 12.

10. Minnesota- So far so good as the road back to the Insight Bowl is still all clear. Get those plane tickets ready Vose.

1. Texas and USC- It’s never a good sign when the national story is two coaches on the hot seat in week 2. But, when it isn’t your program it is really entertaining. Texas takes the cake here since they have been getting offseason hype and then just got blasted by BYU. They gave up over 500 yards rushing and fired DC Diaz in the wake of the performance. They since have hired GERG to replace him. This should end well.

Out in LA I was able to watch the end of the USC game and apparently the Trojans are following the Sparty offensive gameplan. Their two QBs threw for a combined 54 yards! Jesus Christ. It is as if Kiffin is pulling a Costanza and just wants to be fired. (I actually think that may be the case.)

2. UGA– After losing last week the pressure was on in Athens and the Bulldogs delivered in a big way. Murray threw 4 TD passes and the Dawgs are now set back up as the favorite in the East with the Gators losing this weekend as well.

3. Spurrier- The press conference after their loss was fantastic. The chugging Sprite as the question about his coaches argued part kills me.

4. The U- Big win by Miami over the Gators and helps the ACC perception so far in 2013. However I will only be able to think about Miami is how my buddies girlfriend described Miami’s coach Al Golden as “hot.” I was perplexed by this because I didn’t even know women were aware of Al Golden much less attracted to the man. I then proceeded to ask about 30 questions and none of it had to do with his tie. She just digs Golden’s vibe.

5. Oregon- I am not sure how they might fit Helfrich into an “I Love My Ducks” song but I think they could figure it out.

6. Teddy Bridgewater– 4 more TDs for Teddy. UK this week and the I am sure the tailgates will talk 100% basketball

7. LSU- So the Cam Cameron hire may not be a disaster.

8. WVU vs Oklahoma- I saw the score late Saturday night and a little piece of me died inside.

10. Kingsbury Watch– Texas Tech rolled again as Kingsbury showed off not one but two freshman QBs. America gets a good look at its favorite coach this Thursday as the Red Raiders host TCU.

11. Bama vs A&M hype– Get ready because the hype is here. As much fun as I had in Ann Arbor this weekend I look forward to sitting on the couch this weekend and soaking in this game as well as a bunch of big B1G vs Pac 12 matchups. (I would look forward to Texas vs Ole Miss to but its on LHN so I will just have to imagine the disaster in my mind.)

I am going to go drink a gallon of water and stare at the TV. Have a great day.