The 2013-2014 NBA season is getting closer than anyone actually thinks so it’s time for an article on the Bulls. Sure it’s easy to have your football blinders on but come on, by November 1st, we Bulls fans will not only get to experience a potential preseason comeback of D Rose in Rio, we’ll also get to see a definite regular season comeback of the Chicago’s hero against back-to-back defending champions (and then another marquee game against the Knicks)!

I personally have been waiting for this for the last 15 months. Having to sit on the sidelines and listen to the public defamation D Rose while the rest of the world is back on LeBron is just enough to cause a 15 month hangover. I know my Bulls fans feel me.

Now I’m not implying that the Bulls are going to reverse the momentum created by the Heat in the last two years. But considering multiple variables, they are a lot closer than most think.

Looking at this through “the Bulls will beat the Heat and win the NBA finals” lens (which some may call the obvious homer perspective), here are a few predictions about the year.

Including me. Wait no, I’m actually one of Jimmy’s biggest fans. For all other Jimmy Butler fans here is some statistical reason for excitement:

It isn’t rocket science to see that Jimmy’s progression as a budding NBA talent is there. In a short period of time, Jimmy has gone from averaging 2.6 ppg/8.5 mpg (Rookie season) to averaging over 15 ppg/44mpg (2nd season) and doing an exceptional job at guarding LeBron. Impressed yet?

Maybe Jimmy isn’t a perennial All-Star, but maybe he is? This improving stat line not only gives room for optimism that he can be the two guard of the future, but it also suggests that the Bulls have filled a major hole in their two guard spot. Something all Chicago fans have been patiently waiting for as we’ve endured the Keith Bogans, Kyle Korver, & RIP Hamilton experiment.

His stat line is identical to OJ Mayo but with more minutes and more defense. He comes at less than $2 million per year over the next two years. He loves Chicago. He and Derrick have a great relationship. Need I go further? Didn’t think so.

Jimmy Butler is the immediate #2 guard of the future and his performance this year is about the most guaranteed prediction you can make about the upcoming Bulls season.

…But don’t expect them until at least Christmas, if not the All-Star game. While one can only speculate, I believe that Derrick’s apprehension to coming back last year happened due to two things: complications of a re-torn ACL in the early stages of his rehab in 2012, and a predetermined decision by Bulls brass & Rose camp of sitting out the 2012-2013 season.

With that being said, Derrick’s fearless confidence clearly took a hit last year and that will take time to get back…as will his ability. 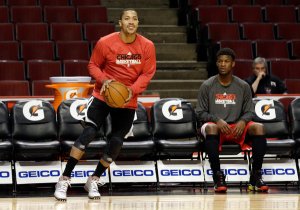 All true NBA fans know that what makes Derrick special is his heart, his attitude and his incredible athletic ability. Few athletes possess that combination attitude, determination & ability. When the three are clicking at all cylinders, you get MVP results. When one gets hurt as bad as it did Derrick, all three variables come into question.

I believe that when faced with controversy and the odds stacked against you, great players elevate their game higher than they have ever before. Time after time we’ve seen this happen: Jordan returning to basketball, LeBron after the decision and Kobe when contemplating a trade. Each one of the modern greatest have worked through the mud to get where they are now and I believe we can expect that from Rose.

As an optimist and a realist, Rose won’t be consistently back to form until at least the beginning of 2014. But we will know early on what to expect. If he show glimpses of greatness then he’ll be consistently great come second half of the year and into the playoffs.

3. Bulls Under the Management Spotlight Will Perform Favorably

One of these guys is here by unfortunate circumstances. The other is here because he chose to put himself here with improved mediocrity. Can you guess who is who?

Luol Deng has done nothing but elevate his game over the last three years. Back-to-back All Star appearances, playing through injuries, playing marathon minutes and having a great attitude in the process

Boozer was brought in to be the league’s top 3 Power Forward by virtue of consistent scoring, exceptional defense and veteran leadership. Sadly he’s been more of a frustration rather than the pleasant surprise Deng has been.

But no need to be down, they both have one more year before Gar & Pax have to make decisions on them both. Optimists say, “finally we have the five guys we wanted four years ago to take us to a championship”. Pessimists say “this team is still lacking that top stud that will get us over the Heat”. I am both.

Bulls fans can expect big things from Boozer this year. Boozer has been an amnesty candidate for the last two years. But the big misconception is that since two years ago it has been predetermined that he will be amnestied after this year. Yes that right, he’s been amnestied for the last two years just not until at the end of this year. This means Carlos will either have his best season of all-time in order to get the Bulls to keep him, have a great year to have another team take a shot on him, or have another crap year that ends his career as a dud. I like my chances on either option 1 or 2.

Deng is more of a question mark. He has put off wrist surgery for the last two years, averaged over 40 minutes per game and exceeded expectations. However Deng makes just under 15 million dollars this year in the final year of his contract. If you ask any Bulls fan, resigning him at this level is not worth it as the owner of his next contract will tell you in five years from now.

Either way, with Deng in a contract year and Boozer in a year where he has to defend his value to the league, I like both of them to focus and concentrate on the bigger picture… They need results.

If the Bulls can stay healthy, I love their chances this year to throw some heavy swings to win the Larry O’Brien trophy.