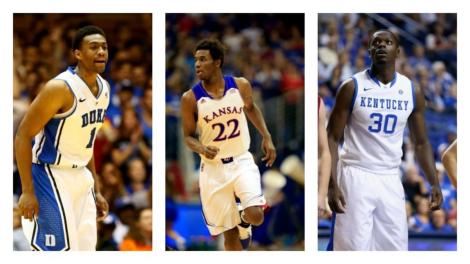 Thank you, Magic and Sir Charles. Now if only young college basketball stars will listen to you instead of agents, shoe company representatives and recruiting services.

With the first week of the NCAA basketball tournament in the books, Magic Johnson and Charles Barkley both have said before national television audiences that none — repeat, none — of the freshmen players are ready for the NBA.

This means you, Duke’s Jabari Parker and Kansas’ Andrew Wiggins — not to mention numerous other misguided and less talented underclassmen than that celebrated pair.

Sure, Parker and Wiggins will be top draft picks — maybe the first two — but that’s only because the modern-day NBA drafts on potential rather than readiness.

The trouble is the message that Parker, Wiggins and others need to hear has been drowned out by agents and shoe companies waving contract dollars once they have been already intoxicated and deluded by recruiting services that project them holding the winning lottery ticket.

And you can throw in all the sports writers who touted Parker and Wiggins in the preseason as the next LeBron and voted Kentucky’s five freshmen starters as the No. 1-ranked team in the nation in the Associated Press poll. Everyone of those writers should be forced to post a message on their Twitter page: “I’m a sap and a lackey for agents, shoe companies and recruiting services. Please forgive me.”

Barkley, a Hall of Famer who stayed three years at Auburn, made his comments on the CBS NCAA tournament post-game show. With that audience, hopefully many young players heard him. I wish, though, he had added to his comments by explaining the difference in his game between his freshman and junior seasons at Auburn and how it prepared him for the NBA.

Johnson, who stayed two years at Michigan State, made his comments on the Dan Patrick Show. He hawked Pringles Tortillas as Patrick asked him about evaluating which young talents are ready for the next level. If you missed it, you can hear the replay on Patrick’s website.

“I think first of all, there is the competitive nature and also the skill set,” Magic said. “And then, are they mature enough to come into the league and play 82 games? Play in a man’s world? Maturity level is really important. A lot of time somebody might have one of them. They have the skills, but they’re immature. We have seen that happen so many times with young players.

“Also, they’re not ready for the 82-game grind. There are very few Lebron Jameses, Kobe Bryants who can come right out of high school to the pros. This class is a really good class, but there are no Kobes or Lebrons in this class. We have to realize it takes two or three years before they adjust to the NBA.”

Magic, of course, could have rightly thrown his own name into that grouping with LeBron and Kobe. As a rookie he was an NBA All-Star who won an 1980 NBA title and was the NBA Finals MVP. He also would have been the NBA Rookie of the Year, but he was beaten out in the voting by Larry Bird, who entered the league following a college career as a FIFTH-YEAR senior at Indiana State.

Barkley, it should be noted, was the fifth pick of the first round in 1984, but he still needed three seasons to make his first NBA All-Star team in 1987. And nobody was questioning Barkley’s maturity coming out of college. He likely knew how to take care of himself in a man’s world when he was in junior high.

Looking back to 2013 decisions on the draft by young prospects, one projected NBA lottery pick who listened to cautionary advice was Michigan State guard Gary Harris. He returned for his sophomore year based on advice it’s not when you get in the NBA but how long you stay. Barkley needed three seasons to become and NBA All-Star, but he ended up a 10-time All-Star who wasn’t an NBA MVP until a decade passed in 1993.

Harris has the defensive skills — unlike Parker and Wiggins — to jump to the NBA, but he wanted to improve the rest of his game. He still needs work on playing more aggressively and creating his shot. He could use a third year of college, but at least he stayed two if someone lures him into leaving early.

Last year’s underclassmen who declared for the NBA draft are topped by a bust, UNLV freshman Anthony Bennett, the No. 1 overall pick by the Cleveland Cavaliers. Bennett’s confidence may never recover from his dismal season. Have fun playing overseas for the rest of your career, Anthony.

And don’t expect anybody to remember your name when you return home to your alma mater of one year with adoration as it’s showered on a Greg Anthony or a Larry Johnson who played for the Rebels throughout their senior seasons.

Of the five NBA rookies widely considered to be having the best season, there are no freshmen and only two sophomores.  Indiana’s Victor Oladipo (Orlando) was a junior, Florida’s Nick Calathes (Memphis) played three years of pro ball overseas after two years at Florida and Duke’s Mason Plumlee (Brooklyn) was a senior. The sophomores are Syracuse’s Michael Carter-Williams (Philadelphia) and Michigan’s Trey Burke (Utah).

Parker and Wiggins will eventually mature into NBA players with their immense talent if they enter the 20124 draft. But for most of the other underclassmen that turn pro too early, they are on an express train to their next stop at Anonymity Street.

We can only hope some of them are listening to Magic and Sir Charles.