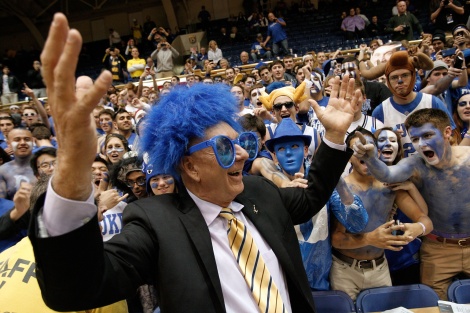 Mercifully, another year enduring Dick Vitale broadcasts and wondering how he became famous has wrapped up. He reminds me of the cultural trend known as the dumbing down of America that brought us the Kardashians.

Yes, he draws ratings, but does he say anything besides the obvious and then repeat it?

There was a time when Vitale was a capable analyst, but that was before he pursued his financially rewarding TV persona. He has aged into a cartoon character barnacled to famous coaches. Bill Cosby recognized Vitale as a goof-ball when he cast him as such in moving man’s role in a 1992 episode of the “Cosby Show.”

I speak and type with more Vitale background than most college basketball fans. My first encounter with him was at a basketball skills camp in the summer of 1973. Long before I realized he was an all-hype ESPN analyst, I saw him up close as an all-hype coach at the University of Detroit.

Yes, he won enough games with the Detroit Titans to make the 1977 NCAA tournament and have a court named for him at the school’s arena, Calihan Hall. Vitale recruited future NBA players Terry Tyler and John Long to comprise the most talent assembled on a U of D court since Dave DeBusschere shot hoops alone at Calihan (to paraphrase President Kennedy, who when he honored a collection of Nobel Prize winners in 1962, said, “this is the most extraordinary collection of talent, of human knowledge, that has ever been gathered at the White House, with the possible exception of when Thomas Jefferson dined alone.”).

Just because Vitale could recruit doesn’t mean he could coach. Examine his NBA record with the Detroit Pistons when he matched wits with pros. Not even Hall-of-Famers Bob Lanier and Dave Bing saved him from himself. Vitale went a combined 34-60 in one season and 12 games of the second season.

To explain my first impression of Vitale, allow me to step back in time to the aforementioned summer of 1973. Vitale was the newly named head coach at the University of Detroit and was guest coach for a day at the Wolverine Basketball Camp that I had attended for the second summer in a row. Wolverine is a small town in northern Michigan’s Lower Peninsula (anyone who knows me understands I would never attend a University of Michigan camp), and the week-long over-night camp was rooted in fundamentals.

At the time I was a 6–foot-3 center on my high school team entering my senior year. I weighed 165 pounds — an awkward period when I considered it a curse to be unable to gain weight. But I gained a shooting touch at my first Wolverine summer in 1972 thanks to Michigan State guard/forward Mike Ridley, who was then a Wolverine counselor.

I attended the camp both years at the encouragement of a basketball buddy, Byron Kramer. Byron was the kind of guy who practiced step-and-drive moves over and over — boring stuff like that. He once attended a Detroit Pistons exhibition game in Grand Rapids and soaked up Dave Bing’s defensive techniques.

Byron — a track coach at Oglethorpe University near Atlanta — went on to play a little basketball at Ferris State University in our hometown of Big Rapids under Jim Wink, a legendary coach with 326 career wins. Wink would have coached circles around Vitale.

Vitale appeared at Wolverine the second year we attended. He asked for a volunteer to demonstrate a defensive stance and Byron hopped up front, proud of his David Bing-modeled position.

Vitale screeched, “Surely you don’t play defense like that!”

That became our running gag-line in pickup games; you beat someone for a score and cackled, “Surely you don’t play defense like that!”

We felt we learned more from Bill Ullenbruch, the camp founder and Michigan high school coaching legend who won nearly 400 career games, and his counselors such as Mike Ridley, even though they never achieved Vitale’s fame or bank account.

Our respect for Ullenbruch and Ridley and dismissal of Vitale lived on. In fact, much to my chagrin Byron used the “Surely you don’t play defense like that!” line at my expense in a high school game our senior year, prompting me to laugh in the middle of a contest with a close score.

I say chagrin because we were opponents in high school after we were teammates in middle school. My parents moved to a neighboring rural setting and I played for Chippewa Hills, a consolidated district high school comprised of four small-town cliques. Our basketball roster had zero sense of team chemistry.

What I didn’t learn about defense from Vitale or teamwork from my high school experience I came to understand as a sportswriter. Winning teams possessed bonding qualities and those without the trait failed. In my writing career I chronicled players and coaches with team unity. I typed with a journalist’s eye for anecdotes and an envious heart for what I missed as a high school athlete had I remained in Big Rapids.

But you don’t have to be a sportswriter to cringe over how much Vitale ingratiates himself with famous coaches, “diaper-dandies” and the student sections he wades into when the TV camera is pointed their way.

Now, Vitale, of all people, decries those who criticize young college players who don’t live up to their recruiting hype in this one-and-done era. He’s the guilty party who started the “diaper-dandy” hype.

Last week before the North Carolina-Duke game Vitale said it was the biggest rivalry in all of college sports.

Has Vitale ever heard of football rivalries — some with more than a century of history — such as Ohio State-Michigan, Army-Navy, Alabama-Auburn, USC-Notre Dame and USC-UCLA? Duke-North Carolina basketball was a regional Tobacco Road rivalry until Duke Coach Mike Krzyzewski arrived to challenge North Carolina’s Dean Smith in the 1980s with a boost from the dawn of cable TV.

Hey, I’m not alone dismissing Vitale as a cartoon character and sycophant. Distinguished announcer Verne Lundquist recently spoke with “Sports Business Journal” in a report picked up by “Awful Announcing.”

He added Vitale is “an acquired taste.” That’s a mouthful; announcers rarely criticize each other.

John Feinstein, in his book “One on One,” referenced Vitale and the late Jim Valvano: “Since his death a lot of myths have grown around Valvano. One of is that he was close friends with Dick Vitale. He wasn’t. They were colleagues, and Vitale was genuinely torn apart by Valvano’s death and has worked night and day since his death to raise money for the V Foundation. But they were never close.”

Vitale loves being a pseudo-celebrity more than he does breaking down a game. Without Vitale jumping on board with the V Foundation for some noble work, I’m not sure there is much difference between him and the Kardashians. How do you explain they’ve become famous?