Morning America. How was your weekend? Anything fun happen?

O Yes the USA/Russia game that was fun. Here is the video of the whole shootout which I can’t embed because the Olympics hates promoting itself.

Every time the Olympics comes around we always get a new batch of heroes that America clings to for a few weeks before we move on and then remember about them four years later at the next Olympics. At the beginning of these Olympics if you had told me thousands of people across America would be chanting TJ Oshie’s name in bars all across America I would have said you were insane….

But eight shootout rounds later here we are, with videos from everywhere of people soaking in a big 3-2 win over rival Russia. TJ Oshie went four for six in his shootout attempts and has taken the lead (at least here in the States) as the main story in Sochi. 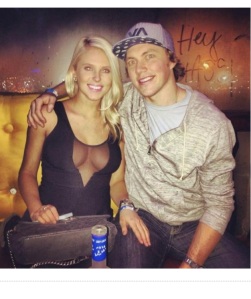 TJ Oshie has been winning all along, we are all now just noticing

Its funny to think how we get to moments like this. Just over a six weeks ago Oshie was a bubble candidate for the team and according to Scott Burnside’s piece his shootout prowess was part of the reason he was taken. (I had no idea he was good at shootouts, I only watch the Blues 3 or 4 times a year.)…

“Oshie’s got that shootout move,” he adds. (Gm David Poile)

So he went from a bubble guy to being the talk of Sochi and now will be a name even the casual sports fan will know for a little while. I find this particularly interesting considering there have been plenty of articles this week suggesting this is the final year the NHL will allow its players to go to the Olympics.

The owners are clearly against it as it shuts down their arenas for three weeks and puts their players at risk to injury in a different uniform. Part of me totally understands this and I would still watch Olympic hockey if it were just college and junior kids playing.

But man, look at those videos of people soaking in hockey before 10am on a Saturday. Thats marketing you can’t put a price on and while it is hard to determine just how much the NHL benefits from having their players at the Olympics I don’t think you can dispute that it is good for growing the game of hockey.

In America only the NFL can capture the general sports population with basically everything it does. The whole country stops on Super Bowl Sunday, the NFL Draft has its own two month buildup and the Pro Bowl (!), the freaking Pro Bowl gets 11 million people to tune in.

Every other sport and league in this country has to play to its base and come up for air in certain events that brings in the casual viewer. College hoops has March Madness, college football has its rivalries, baseball has its history (and drinking outside) and the NBA has its superstars. (Currently KD and Lebron.) Even sports like golf and tennis can gather attention with their majors and this summer the sports world will dial in to soccer and the World Cup. (Which I think is the best sporting event there is and I don’t even like soccer that much.)

Which is why I think the NHL would be dumb to take away its one event that every person enjoys watching, even if it only be for two weeks. I mentioned two weeks ago how Olympic hockey helps everyone get through the post football wasteland that is February. Hasn’t it helped? This past weekend was a blast and I almost don’t mind that it won’t stop snowing and is freezing cold outside when we watch these games.

And now the really fun part begins as we have a bracket. (#PeteMadness) The US team has once again captured everyone’s attention and has a looming Canada/USA rematch in the Semis and another potential rematch with Russia in the final. So lets just enjoy this last week we have together to root for the same team before we split off and root for our own NHL teams and the rest of the country goes back to ignoring hockey.

Then we can all unite once more over our hate of Gary Bettman when he pulls the NHL players from the Olympics in 2018. No one can bring a group together quite like Gary…. 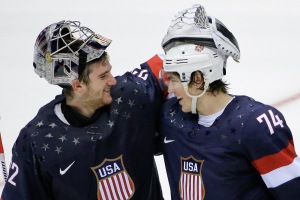 1. Just like 2010, USA was the best team in group play: I know Sweden finished with more points but they were in an easy group and did not look particularly good considering all of the injuries they have sustained. America put up 15 goals which leads the Olympics and has the best goal differential. Much like four years ago Jonathan Quick has established himself as “the guy” and we will ride with him till the very end. America clearly has established itself as one of the best countries for hockey in the world and a gold medal would go a long way towards affirming that. Quarterfinal game will be Wednesday at noon and here is a breakdown of team USA’s path.

2. First glance at the bracket: If everything holds we will have a Europe semifinal and a North American semifinal. The top 5 teams coming into the tournament are the top five seeds after group play and it is hard to see anyone outside that group medaling. That being said…

3. There has to be at least one upset right? Right?: There have been some scares but no major upsets in the Olympics and I feel like someone has to go down. In 2010 Sweden got bumped in the quarters by Slovakia and I just get this weird feeling something is going to shake this tournament up.

4. I am scared of Jagr, there I said it: Let me just get this out of the way and you have to understand how we Penguins fans think. Jagr led teams (2012 Flyers, 2013 Bruins) have bounced us from the playoffs the past two seasons and it worries me that he will go for the trifecta against Bylsma on Wednesday. The Czech team itself really isn’t that scary since they have no goalie but I will be nervous. Just thought you should know.

5. Another cinderella, the Swiss: The Swiss only scored two goals in group stage but only have up one so they are basically the NJ Devils of this Olympics. Led by Jonas Hiller in goal they could for sure pull off the stunner against Canada assuming they get to the quarter finals. I guess I am just really preparing you for the idea Canada/USA might not happen.

6. Canada/USA might happen: Okay, fine, I will get ahead of myself. While this wouldn’t be in the final like in 2010, it would still be an epic matchup and would give USA a chance to slay the dragon after losing the gold medal in Vancouver. I am going to stop typing now to avoid getting too excited. 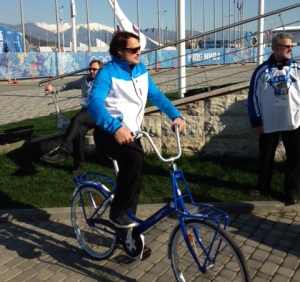 7. In terms of expectation, Canadian Hockey= USA Basketball: The truth for Canada is they really don’t enjoy this and that if they win it is just a sigh of relief. This is similar to when all the American NBA guys head to the Olympics. Gold is the only thing good enough and even then if they don’t do it in dominating fashion everyone gets criticized. (Mainly Sid but he can handle it.)

8. Finland and Sweden are basically the same team: I don’t just mean they are both Scandinavian. Each team is down its top 2 centers and will have to win this tournament with defense and goaltending. Each is capable of doing just that as the Fins have Rask and the Swedes have Lundqvist. (But Finland is slightly better because they all ride bikes everywhere together. That is team bonding)

9. Phil Kessel, American Hero: If you don’t like Phil Kessel then there is something wrong with you. He leads the tournament with 7 points and I know he took part in a few “shakers” over the weekend.

11. Meaningless predictions for this week: Russia will come out of their half of the bracket. With Finland and Sweden both banged up plus Russia gets a warm up game against Norway to get their shit together. I don’t know who they will play. Part of me has this feeling USA or Canada is going to get upset prior to the semis so I don’t want to predict a huge showdown and then we get Czech vs Swiss in a Semi. Either way this is just me typing out my stupid thoughts and should be immediately forgotten by anyone who actually read this piece.

Go USA and enjoy watching hockey in the morning at work for one more week. Gotta prepare yourself for watching all those hoops games in March on your work computer without your boss noticing. Practice makes perfect.