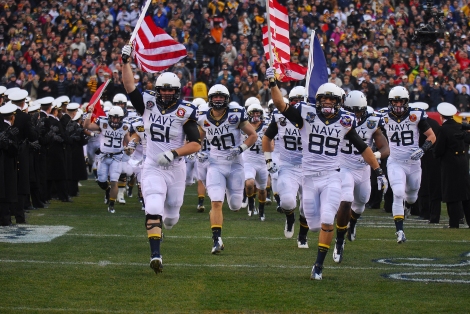 The frustration is directed at defending the confounding triple-option offense that the service academies utilize to compete against bigger, quicker teams.

Respect is expressed for the academy athletes and their commitment to serve their country in a time of war.

But of all the opponents, Stanford head coach David Shaw bluntly put it best when the Cardinal played Army last September at West Point. He specifically referred to this era of an all-volunteer military with less than one percent of Americans defending their nation.

“I mentioned to my team we are playing against young men willing to do things down the road the rest of us are not willing to do,” Shaw said. “These are people who deserve our utmost respect. Our freedom is in their hands.”

For the past five to 10 years, American college-bound students have grown up with their futures impacted by two major turning points in American history — the 9/11 terrorists attacks in 2001 that created national security concerns and the economic crash in 2008 that has projected job security fears.

Those events have combined to contribute to a growing recruiting pool for the service academies, according to Navy coach Ken Niumatalolo, Air Force coach Troy Calhoun and former Army coach Rich Ellerson (he was fired after the season in part for a 0-5 record against Navy). Excluding the big-time recruit convinced NFL dollars awaits him after college, these are times when there are more football recruits who place great importance on graduating without debt and having a job that allows them to serve their country waiting for them.

Calhoun emphasizes it remains a small pool narrowed to athletes with strong academics and a willingness to serve their country. But nevertheless it is a 180-degree turn from the Vietnam syndrome that hindered recruiting for many years. 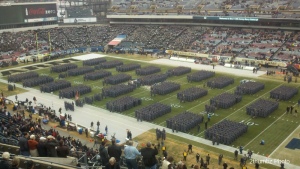 “I think it’s amazing that three guys from the same high school defense will play against each other in the Army-Navy Game,” Byers said. “We’ve never played against each other before. We’ll want each other to do well in the game, but we’ll want our team to win. I think it will add to our lasting friendship.”

The irony of Laster and Wise possibly contributing to a future Navy win over Army is that Byers is the one who opened their eyes to the advantages of a service academy football career as well as opportunities in life after football.

“I told coach (Buddy) Green, the Navy coach recruiting Terrence and J.T., if it wasn’t for Justin, I don’t know if they would have considered the academy,” said Panther Creek coach Sean Crocker. “Justin has been focused on doing what he needed to do to get into West Point since sixth grade. They saw Justin’s passion, and then the next thing you knew Navy started recruiting them.”

Crocker said he wouldn’t be surprised if Wise ends up in special forces.

“I’m going to get a free education and I’m going to play college football, but those are perks,” Wise said. “I’ve always wanted to serve my country. I want to be a Marine officer.”

Laster’s parents are both Duke graduates — his father of the same name was a three-year football letterman from 1985 to 1987 and his mother is Dr. Carol Gibbs — and they spoke to him about the changing job market in the 21st century American economy.

“My mom says there will always be jobs for doctors, but we talked about other careers and job security,” Laster said. “I’ll get a great education and play football, but I’ll also be able to tell my children and grandchildren that I gave back to my country.”

Wise attended his first Army-Navy Game, the 114th renewal played on Dec. 14 at Lincoln Financial Field in Philadelphia, and he reveled in the atmosphere. He observed that Navy’s players, by winning the game, had earned the right to sing their alma mater second after Army sang its alma mater.

The three Panther Creek players discussed their futures in a school conference room when Wise described what he hopes to do in his final Army-Navy Game. The defensive tackle plans to ask Navy’s coaches to allow him a few snaps at fullback. Wise won’t demand to carry the ball; he’ll settle to deliver a friendly block on Byers.

“After the game we’ll all shake hands and then Navy will sing second,” he predicted.

Wise gave a sly grin as he glanced toward Byers and the future.