I can still remember when I was younger, about 11 or 12 years old, waking up on Saturday morning, getting in my friends dad’s truck headed to the park to work out with former NBA player Sonny Parker. There were two players that stood out to me, the tallest person in the gym, and the shortest person in the gym. There was 7’9” Kenny George and about 6-year-old Jabari Parker. Now, we all know where Jabari Parker is headed, but some of us have and some haven’t heard about Kenny George. I am here to give you a little insight on the Kenny Georges and other unheard of talents of the Chicagoland area. 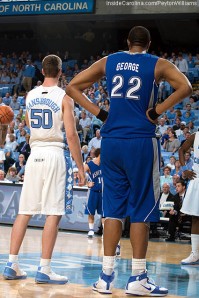 Kenny George was a standout player at UNC-Asheville

The ultimate question is where is the high school basketball Mecca in the nation located? Los Angeles? D.C.? Baltimore? Detroit? Philly? Indiana? New York or Texas? I think none of these compare to the talent that comes out of the Windy City. Of course most places have their transfers and prep schools, but most of the talent from Chicago is home-bred. They grew up on our streets and attended our schools. You will always hear about the big names like Derrick Rose and Anthony Davis, or old names like Nick Anderson and Marcus Liberty, but who is going to tell you about the under-the-radar names; the talented players who never will have a chance to play in the NBA. With new technology, expanded media and definitely the expanded NCAA tournament, lower division one programs and less decorated athletes coming out of high school, get to show their skills more often than ever. I attended Whitney Young Magnet High School in Chicago. Although we are known for our academics, and we have produced many successful doctors, lawyers, film makers (Matrix Trilogy producers), astronauts (first African-American female in space), and even a First Lady (Hey Michelle); athletics have become more prevalent in our culture as well. Our most famous basketball alum is former 3-point champion and one of the originators for celebrating after making a three pointer-Quentin Richardson. We now host the top player in the nation in 6’10” Jahlil Okafor, who will be announcing where he will “take his talents” this upcoming Friday. Including Whitney Young, Chicago has sent a plethora of athletes to many division 1 programs across the country and I am here to reveal some of them to you during the course of this college basketball season.

There were four players from who Chicago ranked in the Rivals Top 150 of 2013. They are:

The obvious big name right now is Jabari Parker of the Duke Blue Devils. As most of us saw last night against Kansas, Parker has the size, athleticism, vision, touch, hands, IQ and most other attributes of a high quality basketball player. Although his numbers were superb and he played like the big time player he is, he is not an intimidating shot blocker.  With little help from his teammates Kansas continued to attack him in the post, for which he had no answer. 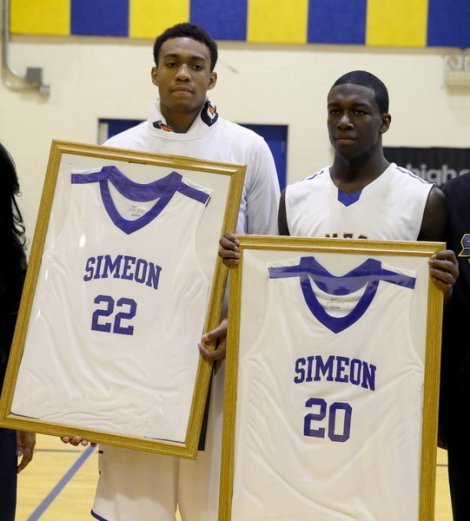 Another soon-to-be stud in the college ranks is Morgan Park’s Billy Garrett. A freshman at Depaul in the Big East Conference, he has a pure shooting stroke, can handle the ball and plays both ends of the floor. In the Blue Demons opener and Garrett’s first game as a collegiate, he came off the bench and played 20 minutes, shot 0-5 from the field and scored only 2 points. But, that was just game one. After game two, he is tied for second on the team in minutes, and leads the team in assists. The opportunity is being presented to him as a freshman, which should boost his confidence and further progress his game.

Another Morgan Park Rivals Top 150 player, Kyle Davis is poised to make an impact coming off the bench for the Dayton Flyers. The 6’0 guard saw the first action of his career this past Saturday, and he played in just five minutes, not scoring any points, but tallying an assist and a rebound. Davis hasn’t yet mastered his shooting stroke, but his toughness and ability to get to the rim and finish is unparalleled, look for him to be a catalyst for the Flyers in years to come.

Round out the Chicago freshmen class is Kendrick Nunn of the University of Illinois.  The best stoke I’ve seen come out of the city since….me, but he still can’t shoot better than me. The Illini are 2-0 so far this year and Nunn has played in both contests, averaging 10.5 minutes, 1 rebound, 1 assist and 2 points. As he gets some experience, Nunn will be a very good player for the Fighting Illini.

These four student-athletes will showcase to the nation the caliber of talent Chicago produces year after year. From Derrick Rose to Anthony Davis to Jabari Parker, and now Jahlil Okafor, Chicago talent reigns at the top of all levels basketball across the country. I will be tracking their progress and that of more experienced players in the upcoming days and weeks, all the way through the conference and NCAA tournaments.