Mack wants me to write some outlook for Michigan for November now that they have no chance for the B1G title. You might wonder why he would want me to do this but then you remember he is a Buckeye so he wants to laugh out loud to himself on a Tuesday. I understand and since I hate myself I am obliging him and writing something.

Here is Michigan’s schedule for the rest of the year

Losing can send any fanbase into a crazy tailspin in which anything and everything can be discussed. This is no more evident than in Brian Cook’s weekly “This Week in Schadenfreude” column. After the loss to Sparty I expect Michigan to be front and center this week as the Michigan fan base can go in some crazy directions. 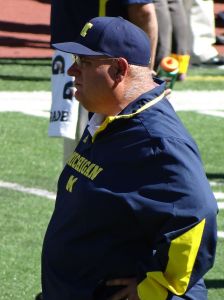 You can call him on the hot seat

For me I get a front row seat of the show as I am on an email thread that runs 365 days a year with a few fellow Michigan grads. The thread is probably something similar to you might have with your buddies about your sports teams. For us it follows recruiting/hoops in the spring, mainly more recruiting and build up towards football in the summer and then of course all football talk during the fall.

In season is a different beast because different members of the thread react in different ways. Some chose to post little, especially when we lose while others post more frequently expressing their opinions sometimes rationally or irrationally. (I can be placed in both categories. I went nuts after PSU because it was a game Michigan should have won but also because of things like this that make me hate Al Borges. This week I have been much more subdued since I am resigned to the fact that Michigan isn’t that good.)

I only bring this up because my one buddy “Dangerous” Dave is one who can jump off the deep end. He has been known to send emails to AD Dave Brandon and even sent some random quotes late Saturday night equating Michigan football to the fall of the Roman Empire. Quite frankly I don’t know where he will go next but it is entertaining.

So I want to present to you four possible scenarios for Michigan over the course of the next four weeks and give you the general reaction and  narrative that will be written if each happens. Also I will include a “Danger Level” as to predict just what Danger might do if each outcome happens as well as the chances of each senario coming true. Enjoy…

Senario #1: Michigan Wins out and goes to a BCS Bowl:The ghosts of Fielding Yost, Fitz Crisler, Bennie Oosterban and Bo Schembechler come to Al Borges in a dream and hand over all of their coaching knowledge as Michigan somehow wins out. This includes a win over an unbeaten Ohio St team in which Al Borges calls the perfect game and Michigan somehow sacks Braxton five times and forces many a turnover. Michigan is then selected to play in a BCS at large game.

General Reaction: Everyone wonders what the hell happened but this is met with general excitement nationally and within the Michigan fanbase everyone forgets the PSU/MSU debacles. All Michigan fans wear their “Manball” shirts all offseason.

Danger Level: -3. Danger takes back every mean word he ever said about Borges and offers to buy him a year’s supply of Fun Dip. Sends them all to Dave Brandon’s office who is confused but not upset.

Chances of this happening: 1%. This is probably to high

Senario #2: Michigan loses one or two but beats OSU: Michigan is still somewhat inconsistent but somehow brings it all together on Nov 30th to beat OSU. ND Gardner shows up and Gallon/Funchess exploit their secondary. Braxton has an off game and Kenny Guiton is sick with the flu so he can’t come in to replace him. (Yes these are the scenarios I have in my head to win the game. I only get more delusional the closer we get to the game.)

General Reaction: People are stunned Michigan pulled the upset and everyone seems to downplay the 9-3 record and instead focuses on Michigan being the first to beat Urban as coach of OSU. Many references are made to 1995 and 1996 when Michigan beat unbeaten OSU teams. Hoke retains the whole coaching staff including Borges. Urban and Braxton plot their revenge for 2014.

Danger Level: 3. Estatic that Michigan showed some improvement over the final month yet is still concerned Borges is still around. Still sends one email to Dave Brandon hoping he will consider talking to Hoke about replacing him. Doesn’t pursue it much as Michigan hoops is doing well and distracts him.

Chances of this happening: 4%. Again, probably to high but I can dream. 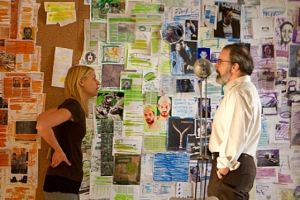 “Tell me again how Lloyd screwed over RR.”

Senario #3: Michigan wins two or three games but losses to OSU in ugly fashion: Michigan wins a few games but ultimately gets smacked around by OSU to give Hoke his first loss at the Big House. Michigan goes to one of the Florida NYD bowls. Michigan still lands their top two remaining targets (Hand and McDowell) and finishes with another top 10 class.

General Reaction: Everyone puts Hoke on “Hot seat” watch for 2014 and justifiably so. He decides to retain Borges through the bowl game and it is TBD if he will keep him for 2014. Michigan fans cling to another top 10 class as reasons to be optimistic including myself. (Nothing like yelling scoreboard to Sparty’s in February.)

Danger Level: 8. Danger sends an email to Dave Brandon daily between Nov 30 until Jan 1. Dave Brandon’s secretary who reads the emails is actually concerned that this person she keeps getting emails from needs help. She calls the local New Jersey authorities and the police go to Danger’s residence where they find him with his walls covered with material about Al Borges, Rich Rod and the spread offense. He is taken away by the local authorities but later released when Hoke decides after the bowl game to get rid of Borges.

Chances of this happening: 80%. Especially the part about Danger. 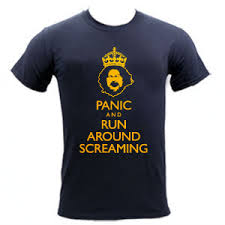 Sales Should be Good

Senario #4: Michigan loses out and their recruiting class falls apart: The team is so demoralized by the MSU loss that they can’t win another game. Michigan fans and recruits lose hope. Michigan plays in the Buffalo Wild Wings bowl and I try to eat 1,000 wings in order to forget the season ever happened.

General Reaction: Hoke’s hot seat is boiling and everyone is calling for his head if Michigan doesn’t improve in 2014. Hoke decides to stick to his guns and retains the whole staff, deciding to ride or die with his guys. Michigan fans wear their “Panic and Run Around Screaming” shirts all offseason.

Danger Level: A Billion. Danger actually tries to take out a loan for $3 million in order to get a 30 second ad during the Super Bowl where he can express to Dave Brandon why Al Borges needs to be fired. He somehow gets the loan and Danger becomes internet famous and heros to all message board goers everywhere.

Chances of this happening: 15%. If there is any good part about Michigan losing out the Danger reaction level is it. I honestly think he would at least attempt to get the loan.

So there you have it. That is your guide to Michigan for the final four games of the season. Keep this in mind as you go through the scores each week and stumble upon how Michigan did. I don’t expect many of you non Michigan fans to follow us because why would you? (Other than to keep tabs on just how far off the deep end Danger can jump.)