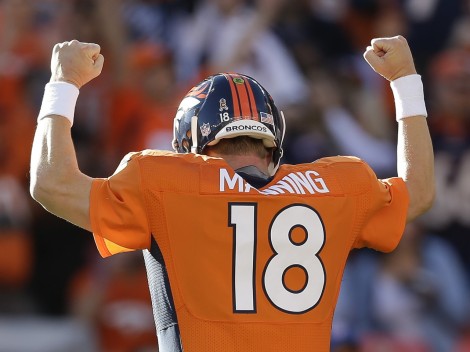 Let me guess what your schedule is going to look like this morning:

-Watch ESPN and wait for them to talk about your players

-Make the final changes to your fantasy lineup

-Sit on the couch and watch football all day long

Accurate? That is what my schedule looks like just about every Sunday morning and this Sunday is no different. With my team down in the dumps, I woke up this morning with sudden jolt of confidence. Whether this confidence is a sign or not, my excitement for today’s games is through the roof. With that, I give you the top 5 fantasy storylines that you have to keep an eye on throughout the weekend…

5) Monday Night Football- Is T.Y. Hilton going to be a consistent option to start at a WR1/2?

Although this story line features a player in tomorrow night’s game, I think that this is something you have to look for as a fantasy owner. Andrew Luck is a legitimate starting QB1 in any fantasy league right now and it is looking like more weapons are appearing for him in Indy. Reggie Wayne owners (me) should be weary of this shifting playing field as of late. Although Wayne is still the vet and the Pro Bowl receiver on the Colts, he has simply not put up WR1 type of numbers lately. He has only one game at 100 yards or over and only two touchdowns thus far this season. He will give you 8-10 points every week and should stay in your lineup but T.Y. Hilton got a lot of love last week and I would expect it to continue. Hilton has two games well over 100 yards and last week he erupted for 2 touchdowns against the league’s best defense in Seattle. I’m interested to see how Hilton responds after last week’s breakout performance and see if he has significant value in a deep league. 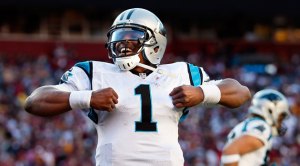 If you are playing in a 1 QB league and you have Cam Newton, you are probably pulling out your hair waiting for him to be a consistent dominating force. Honestly, if you are just an NFL fan, you are waiting for Cam to be a consistent dominating force in the league. But, in a 1 QB league, there are most likely several options that are available to come in and replace your top draft pick. You probably look at your lineup every week and think, “Man, my backup quarterback is a beast, but I can’t sit Cam I drafted him in the second round”. This week will be helpful in deciding whether or not Cam can be the force you have wished for all season. In a 2QB league, Cam’s value is probably higher. But, like a 1 QB league, if Cam is your #1, you are hoping for the same thing. If Cam is your #2, you are probably sitting pretty right now.

3) What will Calvin give you today? Do you start him?

This question applies to me and every other dummy who reached on Calvin in the round and because of it have a sub-par fantasy team. Calvin is our #1 receiver, an absolute beast, and the best receiver in the NFL. He can come in and get you two touchdowns and 90 yards or he can be used as a decoy due to his injury and go Roddy White on us. I think that it is going to be the latter. Here is why:

-He didn’t play at all last week

-He didn’t practice once this week

Whenever somebody does not play for two whole weeks in games or practices, there is a GREAT chance that they will not do anything of impact on Sunday. But, in the case of Calvin Johnson, Jim Schwartz must believe that he is good enough to go out and be a decoy and block. He is matched up with Joe Haden, hands down a top cover corner in the league (yes, I know he is a Browns player), but by Calvin playing it reassures that Haden will not be on any other receiver today. With that, I still put Calvin in my lineup and I think that you should too unless you have a stable of top 10 receivers sitting on your bench. Don’t look for Calvin to put up Calvin-esk numbers today but there is always the chance of a goal line fade every time in the redzone. Start him.

2) How many quarters will the Laser Rocket Arm play today against the pitiful Jaguars?

This is a pretty simply question but something that is on the mind of every Peyton fantasy owner. With the spread being the largest in NFL history today, one can only wonder how many points Manning and the Broncos are going to put up on the Jags early on in this game. I think that fantasy owners can expect Peyton to play 3 quarters, unless the game is within 20 going into the 4th. So, I’m sure all of you are wondering the same thing: Do you start Peyton Manning today with the knowledge he will only play 3 quarters? The answer is probably. Unless you have a viable option on your bench, I think you should go with LRA… joking. You’d have to be on some form of bath salts to not start #18 ever. 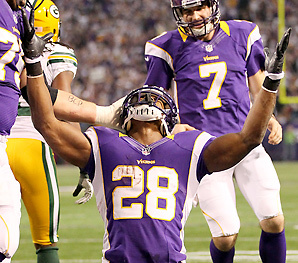 The story that is in the hearts of all of us football fans today is about Adrian Peterson and the horrific tragedy that he went through the other day. I personally do not know how All Day is playing just two days after his son was killed. I want to take this moment to say that the man who had the sick enough mind to beat a 2-year-old kid to death should be placed in a room alone with Adrian Peterson and then get the electric chair. It is absolutely sickening to hear that there are people like this in the world. With that, I am curious to see how Adrian performs on the football field today. He already runs incredibly angry and I would not want to be the man trying to tackle him today. Even worse, I would not want to be the man playing against him in fantasy this week. I am expecting huge things from him today in the wake of his son’s death. Two examples of heroic games come to mind following the death of a family member: Brett Favre after his father passed and Torrey Smith after his brother was killed.

I would look for AP to join this list today. Our thoughts and prayers are with him and his family.