I am from Pittsburgh so I get to be the one who brings you the Steelers preview. I don’t follow the Steelers 365 days a year like I do Michigan for the simple fact that the decisions of 18 year olds (recruiting) is more fun to me than mini camp reports and OTAs. (I always think OTA stands for Optional Taco Accessories.)

I enjoy parts of Deadspin’s annual hating on teams and the part that was spot on was the Steelers fans always complaining about something. I know because I do it as well. Just about every fanbase outside of the Pats would probably stab me in the face to have the same success.

So when the Steelers went 8-8 last year I complained just like everyone else but now that I see the Pirates having success (Just hang in there baby) I understand that its just a see saw effect. One city can’t have three good teams at one time, we would become even more unbearable.

So I won’t be greedy and I don’t want to be ungrateful either. The Steelers are not a Super Bowl team but that doesn’t mean they can’t have a decent year. Here are my key points to a 10 or 11 win season for the Black and Gold. Here we go… 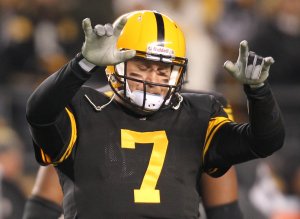 1. Ben (Pump fake) Roethlisberger (Pump fake) has (spin move)  to play (pump fake) 14 games. (Throws ball) We all know he will miss at least one game, I am pretty sure it is in his contract. I just checked and he is healthy as of this moment. (I know he didn’t play in the last preseason game but that doesn’t mean he didn’t get hit by a bus or something.) Without him I am all for joining the already competitive race for Clowney.

2. The AFC is awful. There is just no way around it. Even the Broncos and Pats are not going to be dominant. So if you look at the Lers schedule they only have 2 for sure Ls in the Pats and the Packers. (Sorry Bears fans, that is no sure win for you.) But the Steelers did lose to the Titans, Browns and Raiders last year so its not like there are any sure wins either.

3. Run the freaking football. I don’t like Todd Haley for the simple reason he doesn’t let Ben be Ben. But if he is going to be around and they are trying to be a power O team then, you know, they better be able to run the football. Of course Bell is already out the first half of the year so I am not optimistic.

4. Get anything from Polamalu and Clark. And what I mean is get them to be healthy and be a shade of them former selves for at least some of the games.

6. Don’t kick 50 plus yard field goals to set up the other team. Yes I am looking at you Michael Tomlin.

There you have it. I am not sure what will happpen but I am sure my fantasy teams will be a disaster. This is what happens when you try and recreate the 2004 USC Trojans and Matt Leinart gets cut.