I’m sitting in my desk right now on this lonely Monday night, just praying that the time starts moving faster. If my calculations are correct, there are still roughly 110 hours until kickoff on Saturday and I’m counting down every last one of them. You’re probably thinking, “This dude’s crazy. It’s not like it’s going to be a good game. The Bucks are only playing Buffalo…”

Here are 10 reasons why…

1) Full Week of Classes Will Be Over

Like many of you other students out there, Monday marked the start of the first full week of classes for the school year. That means that syllabus week is over and real schoolwork will be given out throughout this week. That means homework. That means full length classes.

I don’t like homework. And I don’t like class. I’d rather be sitting on my couch playing video games and wasting the day like the majority of 19 year old guys. But, by the time Saturday rolls around, class will have ended for the week and we all get to enjoy what is to come.

When I was 12, there was nothing that I loved more than the Little League World Series. I thought it was the coolest thing in the world that kids my age were playing baseball on ESPN. It gave little Mack Watts hope that he could one day play on ESPN, too. Well guess what? 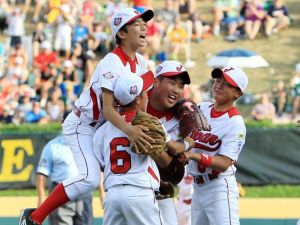 I’m not 12 anymore and I don’t give a crap about 14-year-old baseball players pretending to be 12 to make a name for themselves (see Danny Amonte). I want football and I want it now! It’s boring enough having to suffer through a whole dead period of baseball since the NBA and NHL playoffs ended. The last thing that I want to see is more baseball by less talented players. And Japan won (shocker there). Which brings me to my next point…

While you might ask, “Mack, why don’t you just change the channel and not watch the LLWS?”. My answer is this: watching former NFL players and college athletes analyze present teams and players all day long is not much more entertaining. Sure, I still sit and watch them discuss all of the stats and plays that will ultimately mean nothing in the upcoming year. But how many times can you really discuss starting quarterback controversies?

I’m guilty of this myself as you have probably read analysis on 6 Rings prior to this, and will continue to read it. Over-analysis is simply a time filler. It fills up days, weeks, and months of time because there is nothing else in sports to talk about right now besides baseball. Either way, I’m getting tired of it and need Saturday to come so that I can be entertained once again.

4) The First Tailgate of the Year

Us students love football season for many reasons, but atop the list is the ability to tailgate for the games. It doesn’t matter if your team sucks, people will still wake up early before the game to party and thrive in an atmosphere that isn’t offered anywhere but college (see Indiana University). It is an event unlike any other and we students want it back. It has been almost 9 months since the last game, and kids everywhere can’t wait to set their alarm clocks for 5 am on Friday night.

5) Mark May Picking Against Ohio State

There may not be another person on this planet who hates Ohio State like Mark May does (and there are a lot of haters out there). I personally look forward to Mark May’s picks every week just to see how hard it is for him to pick the Buckeyes. Do I think he will side with Buffalo over OSU this weekend? Probably not. Would it surprise me if he sided with Buffalo over OSU this weekend? Absolutely not. Of course, this is just a personal reason why Saturday will be extra special. Unless you have a weird obsession with Mark May, I don’t think you care too much about this one…

Nothing more needs to be said. Just ask fellow 6 Rings writer Mike Roarty how excited he is for Musburger…

7) Nachos at The Horseshoe

I’m not sure why, but I developed a tradition last season of always getting the nachos at Ohio Stadium. Maybe it is because it was lunch time and I hadn’t eaten anything. Maybe there were other influencing factors. Maybe it’s just because they are the 8th wonder of the world and you can put all kinds of delicious foods on them. I like that, and I’m excited for those nachos once again.

It is safe to say that Clowney may be the most hyped college football player maybe in the last decade. He is so hyped up that there was rumor he would sit out the 2013 season so that he wouldn’t get injured heading into next year’s draft. We have all seen the hit he laid on scUM’s Vincent Smith that subsequently lead to Smith’s helmet flying 10 yards into the backfield and the ball falling out of his hands, only to be picked up with one hand by Clowney. He is an absolute freak of nature and every offensive player in the SEC is scared to lineup against him. I am excited to watch what he will do in 2013. Luckily, we only have to wait until Thursday for him.

On the other hand, everybody is curious what the other offseason story line, Johnny Manziel, will do. We all know what he is capable of doing, seeing as he won the Heisman last season, but how will he respond to this summer? Will he even get to play the entire season or will he get suspended? These are questions that are going through my mind right now.  I am looking forward to see him play on Saturday.

9) The Best Damn Band In The Land

The Ohio State Marching Band makes the rest of the game seem boring when they come onto the field at halftime. Sometimes I forget how incredible they truly are and I am more than excited to see what they put on the field this weekend. You don’t have to be an Ohio State student to know what I am talking about. This band had the whole country raving last year after this show.

10) Football Will Finally Be Here

We have all waited for the start of this season. As a Buckeye fan, it’s hard not to have a bitter taste in your mouth after last season. Going 12-0 and not being able to prove anything makes every fan want something special to happen this season… and I think that it can.

The road to the National Championship starts on Saturday vs. Buffalo and I. Cannot. Wait.

There are many reasons why this week will be slow and painful. From the craving of nachos to the shot at a national title, the anxiety is running deep in my blood and I need Saturday to come sooner.

One response to “10 Reasons Why Saturday Needs to Come Sooner”