We wrap up our position previews with a look at the defensive backs for Michigan this year. The one question will be who replaces Jordan Kovacs. The dude went from a nice walk on story to solid safety (which is rare at Michigan) to an All Big Ten Player and Mattison’s personal blitzing machine.

Michigan must also replace JT Floyd but does get Blake Countess back from injury. Onward to the back of the defense…

1. Strong Safety– I will be the first to admit that I get confused who is which safety in the Michigan defense. Here is a good primer to further understand. It seems interchangeable depending upon the formation but for all purposed this year I suspect Senior Thomas Gordon will be taking over Kovac’s role of blitzing and helping in run support. Gordon has spent the past two seasons being almost invisible in a good way. Never one to make a huge splash or to screw up his job was to be the rock as Kovacs makes the plays. 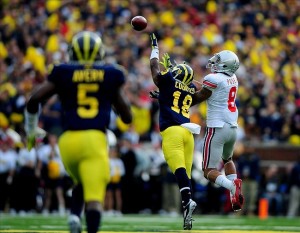 Now a senior expect Gordon to be the one sent on the third down blitzes and coming up to put eight in the box against the downhill run teams.

2. Free Safety– Sophomore Jarrod Wilson will get the nod here after playing in nickel and dime situations last year. Wilson came in touted but did struggle in losses against ND and South Carolina. Like Gordon before him, he will be asked to just not screw up in the hopes of taking over more responsibility down the road.

Courtney Avery may move here as well from the corner spot if Wilson struggles.

Backups will include Josh Furman, Jeremy Clark and true frosh Delano Hill. Plus frosh Dymonte Thomas should move here as well next year, speaking of…

3. Nickel– Dymonte Thomas enrolled early in spring and immediately took over the nickel spot. The Massillon, OH native played linebacker in high school and immediately his game will translate to help Michigan in the run game and in certain blitz packages. You Buckeyes in the audience may remember him as the guy Urban would flip but never came close to doing so, I guess Von Bell will have to do for you instead.

Thomas will make an instant impact and as noted in the linebackers section should help replicate Jake Ryan’s production in nickel situations. I would expect him to vie for Gordon’s spot next year.

4. Boundary and Field Cornerbacks- Blake Countess is 100% and should reclaim his field corner spot. He started as a true freshman in 2011 but missed all of last year. The only good part of him getting hurt is the fact he got a redshirt and has three more years left. The idea of him and Peppers lining up as the corners warms my Maize and Blue heart. (Sorry Sun)

The boundary corner spot will be a battle between upperclassmen Courtney Avery and Ramon Taylor. Avery was dinged last year and didn’t play much and Taylor got valuable experience replacing Countess.

Backups include Delonte Hollowell and Terry Richardson and a cast of freshman.

Meaningless Prediction- Gordon subs in fine for Kovacs but Wilson struggles against top competition and a rotating door at FS happens. Thomas shows a knack for blitzing and will be Mattison’s future weapon. Countess regains form and Michigan’s other CBs are serviceable. Adding Peppers makes Michigan 2014 unit look legit. (Do you get the theme yet?)

Next Up- We look at Mattison’s defense from the big picture and I wonder if 1997 will ever happen again.