We take a break from the salty snack talk and move towards the Michigan defense. I will start with the defensive line for the simple fact that it is all D Coordinator seemed to talk about all offseason. I think he asked the same question about 35 times, “can Michigan get a pass rush with the front four?”

In his first two seasons at DC Mattison has lacked that War Daddy (Football term!) pass rusher to get to the QB and has needed to blitz in order to cause chaos. Lets see if this years unit can create that pressure…

1. Weakside D End- Junior Frank Clark is rare to Michigan since he is a Glenville kid who made his way North. He has spent the past two falls showing flashes of his talent but no steady production. Now all the offseason hype and expectations has come his way and MIchigan will need him to push for double digit sacks if the defense is to take the next leap under Mattison. 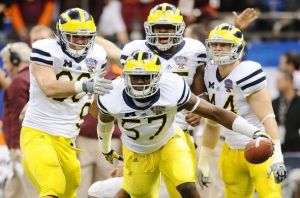 Behind Clark are two contrasting players backing him up. Sophomore Mario Ojemudia is an undersized end who actually played tackle in high school. The other backup is gigantic 6’6” 270 Taco Charlton who has earned rave reviews since enrolling early in the spring. I hope he pans out so it gives me another reason to make tacos as often as possible.

2. Strongside D End– A committee is expected to replace departed Senior Craig Roh. While never flashy, Roh took up Ryan Van Bergen’s mantle as reliable end from 2011. Mattison hopes one of three guys can take up that spot. Sounds like redshirt soph Keith Heitzman will get first crack while two highly touted redshirt frosh Chris Wormley and Matt Godin will try and take the job. Wormley was set to be in the rotation last year before tearing his ACL in fall camp. If healthy he is the most talented guy and should take the job by seasons end.

3. Three Tech D Tackle- Senior Jabrill Black is back will be the starter after backing up Will Campbell last year. While undersized for the position he played well last year. It is possible two young guys push him over to SDE. Both Willie Henry and Tom Strobel had good springs and have more natural size for the position. Frosh Maurice Hurst Jr is being mentioned as a contributor.

4. Nose Guard- Michigan fans were in a panic about this position last year at this time when former O lineman Quinton Washington was projected to start. All Q did was go out and be as steady 2 down nose guy who produced game in and game out. He could generate all Big Ten votes if he repeats his performance and will be backed up by 5 star sophomore Ondre Pipkins. Richard Ash rounds out the depth chart.

Meaningless Prediction- In answer to Mattison’s question, sort of. Clark hovers at around 7 sacks and the backups chip in to push the WDE production above 10. The SDE and 3 Tech positions are platooned depending upon the situation with the youngsters taking over the starting roles by November. Q and Pipkins help stuff the run. The D Line is good but not great. That happens in 2014. (None of this is affect by Gardner’s health. I don’t think) Next Up- Michigan tries to cope until Jake Ryan gets healthy and the rest of the linebackers.