All day Friday I was flat out giddy. I knew that work stood no shot of handling my concentration because CHICAGO BEARS FOOTBALL IS BACK BABY!!!

Unfortunately into the first 5 minutes of game action, my enthusiasm had to be curbed because I realized two things:

2)      And….Cutty tossed a pick on the first offensive play from scrimmage

Despite that lack of tangible points to indicate how the Bears will fare in the regular season, there are a few notes to extrapolate on for future speculation. Instead of focusing on the boring/standard “good, bad and ugly” evaluation that most beat reporters provide, I’m going to focus the good with a “moved the chains” and the not so good which I will title “Jerry Angelo Please”

Here’s what we all saw Friday night:

It’s hard to come away from week one in the preseason and feel like your crop of rookies are a good bunch. For the Bears, Phil Emery & Marc Trestman, I think they have to feel great about their selection’s first performance

First, Kyle Long (1st round) played roughly 75% of the game and he dominated while in. Known for his physical presence, Long has gained the reputation of being a bully, beating up the d-line in camp. On Friday, Long was featured multiple times by the broadcast booth, highlighting strong play and technique. After Chris Williams & Gabe Carimi, I need a breath of fresh air and all signs lead to a good #1 selection

Next, let’s switch to the young linebackers. Never did I think I would feel comfortable immediately with Urlacher’s departure and the new addition of two rookie linebackers, but boy did they show out to help my evening.

Jon Bostic (2nd Round) was the shining star of the Panther’s game because of his 50 yard pick-6 on Cam Newton early in the first quarter. He showed excellent awareness with his drop back, composure in his pass zone, a unique ability to make a difficult grab (pick), and tremendous speed in his ability to house it. Bostic finished with two solo tackles and of course his pick-6. 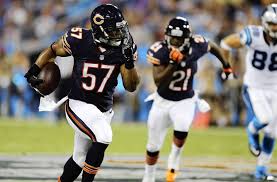 Secondly, Khaseem Greene (4th round) performed exactly as the Bears were looking for, in terms of game impact that they wanted when the drafted him. Greene, known for his consistency and sure tackling at Rutgers, quietly came in on Friday and led the team in tackles (5 tackles, 1 for loss) including a goal line stop of Deangelo Williams driving him further in the backfield.

Marquess Wilson (7th round) is still somewhat of a longshot to make the team and make an impact given his late round selection and red flags at Washington St. However, Wilson led Bears receivers in receptions (4 for 82 yards), including a big 58 yard catch and run, indicating that he possesses the big play ability the Bears drafted him for.

Has anyone actually thought that the defense has a shot to be better this year than last year? Sure it’s a rash assumption because leadership is a tough variable to replace, but athletically they are actually much better off this year and they showed it on Friday.

This is in-part because of addition by subtraction, meaning Phil Emery got rid of the old players and added youth. The defense I saw on Friday was quicker and able to cover more ground in a shorter period of time than last year’s team. The increased speed at the linebacker position allowed the secondary more freedom and it showed in their pass coverage. Sure Carolina completed over 50% of their passes, but the Bears held them to 200 yards on the air and forced two INTs, something I will take every game in the regular season.

The Panthers may have scored 24 points, but if you factor out the TD’s that resulted from Cutler’s pick in the first quarter as well as the pick-6 thrown by Matt Blanchard, then the defense allowed 10 points and played tremendous.

A key difference maker to watch in week two is going to be Nickleback Isaiah Frey. Frey likes to hit and use his speed.

I’m looking for this unit to continue to build on their momentum in the preseason.

How much more do we have to take of this guy? I mean seriously, why were we stuck in this position in the first place? Why does J’Marcus Webb still have a starting spot with the Chicago Bears?

J-Webb nation did nothing to prove his worth on Monday night. Bears fans were holding on to the hope that the switch from the incredibly difficult Left Tackle position to the seemingly more simple Right Tackle position would be easier but Friday night proved that it really just didn’t matter.

Nation (as I will now call him) broke the cardinal rule of the preseason in the first three series “don’t let your QB who is in a contract year get sacked in the preseason week one game because you can’t handle a bull rush at 85% from an average DE”. Which he did, and Cutler went down, something we need to not happen this year. 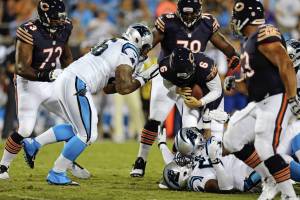 For all Bears fans, don’t get too excited about Nation for the rest of the year (if that was even possible). He’s had a poor camp thus far and his week one performance was reflective of his summer to date.

You can teach an old dog new tricks before you could teach Nation to play on the offensive line productively.

Right to the point, only time will tell for this new look Bears. Cutler by no means had a stellar performance and neither did the team. The fact is that this will be a work in progress this preseason implementing a new regime. Looking forward to seeing what transpires in week two…

Side Note: If you are interested in getting involved on 6 Rings, feel free to contact us at 6RingsSports@gmail.com. We are always interested in finding new voices that want to write.